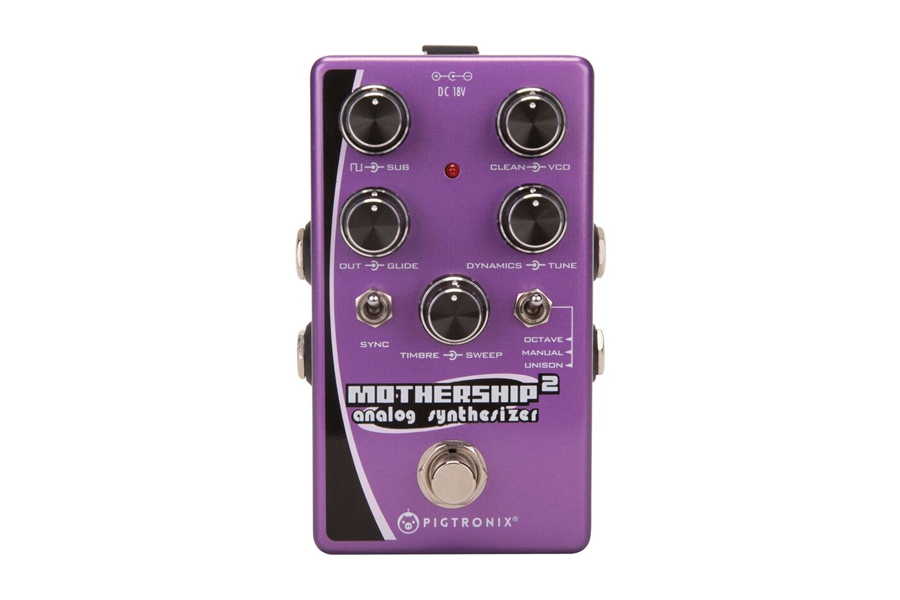 After years of development, Pigtronix is now launching the second version of its legendary Mothership analog synth pedal. Mothership 2 is a velocity sensitive, pitch-tracking, three-voice analog synthesizer with oscillator hard sync and pitch modulation via portamento and CV / expression control. Housed in a compact aluminum chassis, this state-of-the-art pedal goes lightyears beyond the original Mothership, delivering a user-friendly guitar synth with real-time pitch and amplitude tracking, switchable preset tunings and a devastating Sync effect that delivers new modulation effects for guitar, bass and anyone brave enough to plug in to the analog future of Pigtronix.

The Sync effect found in the Mothership 2 can be dialled in to create a staggering array of unique sounds using the Sweep and Timbre controls as well the on-board Glide function to achieve modulation and pitch effects that sweep from one note to another with adjustable timing. An optional expression pedal / CV input can also be used to modulate the VCO in parallel with the on-board knobs and Glide function, creating "Sync Sweep" effects from another planet.

The dashboard of the Mothership 2 contains five, custom-made, dual-concentric potentiometers and a pair of toggle switches.

The top row of controls provides individual level knobs for VCO (Triangle wave) and Square-wave voices as well as the original Clean guitar sound and a gut-busting Sub-octave Sine wave voice that can be removed from the main mix bus and sent to its own dedicated bass amplifier when the SUB output jack is used.

The middle row of controls provides Master Volume, Glide, Fine-Tune and an adjustable Dynamics function that allows the player to adjust the "feel" of the synth's amplitude tracking.

The bottom row of controls contains the three-way tuning switch with Unison, Octave Up, and Interval (Maj 3rd, 4th, 5th) presets as well as a new Sync function that slaves the VCO's Triangle and Square wave oscillators to the input signal, creating a pitch-locked, unison sound with complex harmonics and overtones that can be modulated.

The Mothership 2 will be available from September 2017.