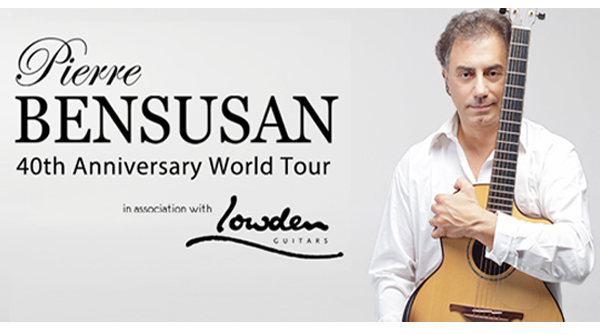 Pierre Bensusan, the award winning French-Alegerain guitarist who is known as the 'Mozart of Guitar, will head to the UK as part of a wider 40th anniversary tour this month.

Over the past 40 years Pierre has been a regular visitor to the UK. His celebratory 40th Anniversary tour, in partnership with Lowden Guitars kicks off at Jersey Arts Centre on Monday 9th June and travels through the South and Midlands before heading into Scotland, Northern and Southern Ireland, where Pierre will perform at the National Concert Hall in Dublin on 26th June.

Performing upwards of 3,000 concerts over a 40 year career, Pierre is recognized universally as the foremost exponent of the DADGAD guitar tuning, the successor to the pioneering work of the late Davey Graham, and the catalyst to a whole new world ofacoustic guitar styles through the likes of the great Michael Hedges who dedicated and named his track 'Bensusan' to Pierre on the ground breaking album Arial Boundaries. In 2008 Pierre won Guitar Player Magazine Readers choice award, for Best World Music Guitar Player.