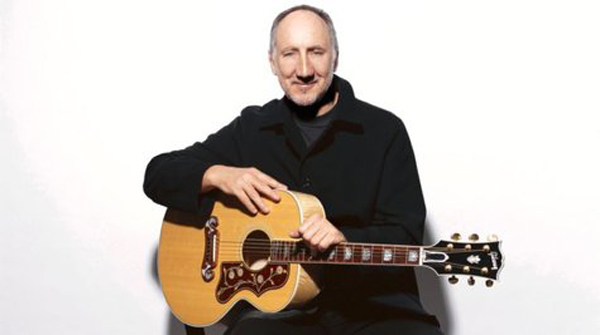 The Who's Pete Townshend will bepresented with the prestigious Les Paul Award atthe 28th Annual Technical Excellence & Creativity Awards to beheld at the Anaheim Hilton during the 2013 NAMM show.

The legendary lead guitarist and principal song writer forThe Who will receive the award on Friday 25thJanuary. Presented by the TEC Foundation for Excellence in Audio,the TEC Awards recognizes outstanding achievement in professionalaudio technology and production.

According to Michael Braunstein, Executive Director of the LesPaul Foundation,

"Following in Les' footsteps, Pete Townshend personifies bothguitar wizardry and technical prowess in both studio and live musicperformance. He is a true original and a natural choice for the LesPaul Award honour."

The Les Paul Award is named in honour of themusician and maverick inventor who passed away in 2009. RussPaul, son of Les, will present Townshend with the award onbehalf of the Les Paul foundation. Past recipients includePaul McCartney, Brian Wilson,Stevie Wonder, Neil Young,Bruce Springsteen, Sting,Al Kooper, and other musical giants since theaward was instituted in 1991.

The TEC Awards will be held on the second night of the NAMM Showand is expected to attract more than 1,000 audio and musicprofessionals from around the world. Proceeds of the ceremonyprovide scholarships for students of the audio arts and sciences,and support programs promoting safe hearing in the musicenvironment, an issue of special importance to Townshend.