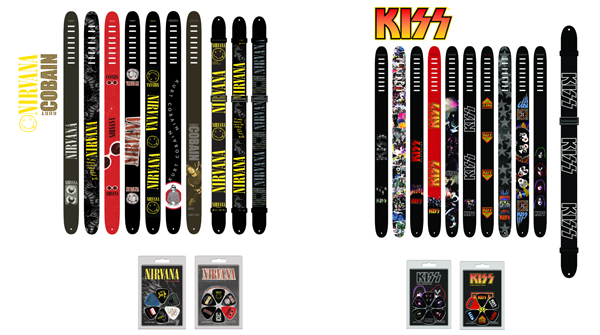 The new ranges continue the expansion of their licensed collections, which includes accessories featuring The Beatles, AC DC and Pink Floyd amongst many others.

There are ten Nirvana & Kurt Cobain guitar straps and two sets of picks in the new range. Images used on the straps and picks include the Nirvana smiley face, Kurt Cobain's white and black alien sunglasses and of course seahorses, which featured in many of his paintings and drawings.

KISS's simple, strong and instantly recognisable logo looks stunning on the new guitar straps and picks. There are eleven straps and two sets of picks to choose from, which include images from their first album 'Kiss', the critically acclaimed 'Destoyer' album, and the classic 'Rock And Roll Over' album.

Nirvana contemporaries, Soundgarden, also have a range of five straps & two sets of picks. Designs include the jagged cyclone from the two times platinum 'Badmotorfinger' album and simplified version of the 'King Animal' Album cover featured on the 'Been Away Too Long' single.

Completing the quartet is The Doors. Synonymous with the band is their simple and bold geometric logo, with the reflective double 'O's and the tiny but essential psychedelic 'The'. Its distinctive design is immediately familiar and makes the four guitar straps and two sets of picks in this series extremely noticeable. Also featured are many iconic images of the band members.

All the skillfully fashioned guitar straps are robust and hard wearing. The polyester webbing straps, with durable heat transfer designs are 2'