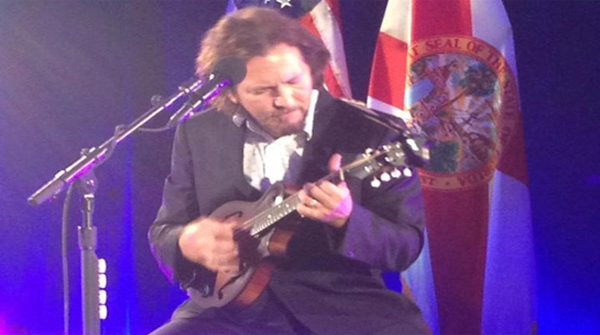 The iconic frontman performed two tracks from his first two soloalbums, 'Rise' and 'Without You' along withcovers of James Taylor's 'Millworker' and Neil Young's'Rockin' In The Free World' for the president and 85guests who attended the event.

Vedder performed the set in a suit and then made a short speech inwhich he slammed Republican presidential candidate Mitt Romney forhis recent "47 per cent comments".

Speaking to the 85 guests, Vedder said:

"I'm an example of someone who never made it touniversity. I did have this dream to be a musician. I felt thatthis dream had an expiration date."

The front man then went on to recall his days working as asecurity guard in a petroleum company prior to Pearl Jam.

"It was that job which allowed me to keep affording to guitarsand microphones. For me, it all began with that ability to get theproper training for a decent job."