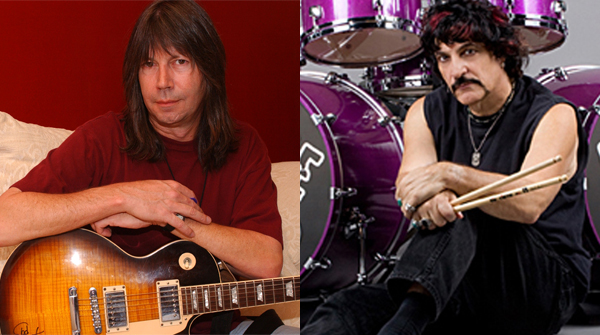 Guitarist/vocalist Pat Travers and legendary drummer Carmine Appice, of the mighty Vanilla Fudge and formerly with Rod Stewart’s band, have joined forces a number of times over the years, and the end result has never been anything less than outstanding.

When these two giants of classic rock meet, sparks fly, the earth shakes, and the audience definitely gets ROCKED! Recently, the boys have decided to revisit their first full-length collaboration, 2004’s It Takes A Lot Of Balls, a supercharged, full throttle piece of real deal rock and roll majesty, giving it a new face, a wider audience, and some additional bells and whistles. On March 4, Deadline Music will release The Balls Album, a reissue of the 2004 album with all new artwork and 2 bonus tracks including a monster cover of Barry White’s “Never Gonna Give You Up.” The album contains some of the bluesiest ball busters of all-time including “Taken,” as well as the fist-pumping anthem “Rock Me!”

Appice offers this praise for his co-conspirator, “I love playing with Pat. He is a great artist, and this was one of the best albums I have made, especially in such a short time - 3 weeks to make! Great songs, great playing, lots of energy, and each track has a lot of BALLS!” Travers likewise enthuses about his partner, saying “I have been a fan of Carmine since 1967. I followed his career over the years and was very pleased to meet him when he was playing drums for Ted Nugent in 1981. We did a lot of shows together and got to know and like each other along the way. I would bump into Carmine at this and that affair over the years and then in 2003 we had a blowout jam at the Dean Markley Strings booth at NAMM. We decided that we should record an album together. That led to me going to LA and recording this amazing album. Hope you got ‘Balls’!”

Pat Travers & Carmine Appice - "It Takes A Lot Of Balls"