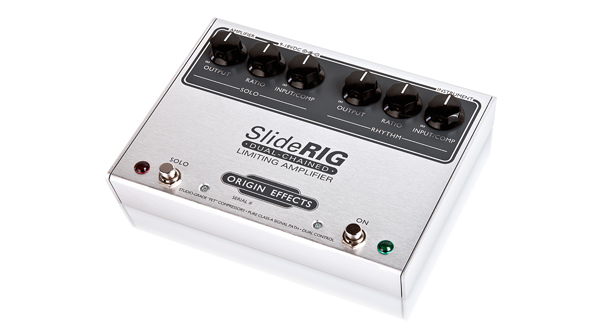 British boutique effects manufacturer Origin Effects haslaunched a pair of new compressor pedals that redefine the levelsof audio quality and performance available from a stompbox. Basedon the musical sound and dynamic response of the UREI 1176 - thelegendary FET compressor first introduced to recording studios inthe late 60s and heard on countless records since - the Cali76 andSlideRig put studio-grade compression within reach of the averageguitarist, in a pedalboard-friendly format and powered by a 9Vcell.

While the Cali76 offers the full complement of studio compressorcontrols, including ratio, attack and release knobs plus a VU-stylegain reduction meter, the unique SlideRig features two FETcompressors chained together in one pedal for even more sustain andsensitivity. Both pedals - which feature bespoke enclosures and are100% made in the UK are available now direct fromwww.origineffects.com priced £229/$299 each.

Origin Effects founder Simon Keats - an electronic engineer andanalogue circuit designer who has worked for the likes of Vox,Focusrite and Trident Audio - explains how the Cali76 cameabout:

"The Cali76 was designed to get that musical UREI 1176 toneinto the hands of guitarists. The 1176 just sounds so much betterthan the pedals most guitarists are used to, but of course theprice is prohibitive, as is transporting a large rack unit aroundwith you! So I stripped out the parts of the design that weren'tdirectly contributing to the tone and then optimised the circuitfor battery operation. I'm used to building high-end, custom studioequipment and I wanted this pedal to be the same - sturdy andreliable, with wide-bandwidth, low-noise, Class-A circuitrythroughout and no ICs in the signal path."

"The SlideRig is something I selfishly designed for myselfbecause I wanted to get that Little Feat sound!" Keats confesses."It's essentially two Cali76s in one box, without the metering andwith the attack and release controls moved inside. Chainedtogether, you get almost endless sustain and the guitar becomessuper-sensitive."

"The SlideRig is unbelievable," says Barrere. "It'sso clean! I've used it on the newest Little Feat recording and it'sremarkable how quiet it is. And having two settings makes itperfect for live shows as you can step it up for soloing."

While both pedals are optimised for electric guitar, the Cali76is also great for bass and can be used with acoustic guitar,vocals, piano or drums and to process just about any recordedmaterial. An upgraded version of the Cali76 - the Cali76Transformer-Option (£325/$425) - features an additional Class-Aoutput amplifier with a custom-wound transformer, providing abalanced line/DI output, pad and ground lift switches and furtheroptions to subtly shape the pedal's tone and harmonicsaturation.