Orianthi Launches 'Be My Band' on Talenthouse 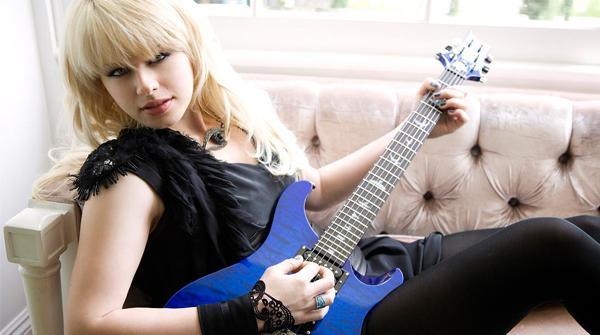 Orianthi Launches 'Be My Band' on Talenthouse -

Gi Issue 21 cover artist's Orianthi is using artist collaboration platform Talenthouse to find four aspiring musicians, a guitarist, bassist, keyboardist and drummer, to literally “Be My Band” and perform with her for one night at a Valentine’s Day concert held at major venue in Los Angeles in 2014. The concert will be taped and aired on TV (details TBA).

This chance for aspiring musicians to use Talenthouse to turn their dream into a reality onstage marks the launch of “BeMyBand,” a first-of-its-kind performance opportunity created by the esteemed singer, songwriter and guitarist (and Eurythmics co-founder) DAVE STEWART. Musicians from around the world can audition through TalentHouse.com to be selected for an opportunity to collaborate and support their favorite artists live onstage in a high-profile show. First Artist Bank, a global community bank for creatives to be launched in 2014 and also founded by Stewart, has stepped up to sponsor the inaugural BeMyBand campaign. http://po.st/BeMyBand

"I always think about all those great players out there in various towns and cities who would love to play alongside a major artist and go through the whole experience of rehearsing and then perform a big show. There are so many singing competitions; this one is about the players in the band. The guys and girls who help create that magic. First Artist Bank is happy to create opportunities to help artists of all kinds take one step towards making a living from their art and Talenthouse makes this happen on a daily basis--that's why we are partners.”

BeMyBand is produced by Stewart’s multi-faceted  Weapons of Mass Entertainment, in collaboration with TalentHouse, and will be launched once every quarter with a different, marquee artist headlining the campaign. First Artist Bank is thrilled to have Orianthi on board as the first headlining artist of BeMyBand. The concert will be taped and aired on TV as part of the BeMyBand series.

If you are a drummer, bassist, guitarist, or keyboard player, submit a video of you playing your instrument at your best. Up to 10 finalists for each instrument will be asked to play original tracks from Orianthi herself. Of those finalists, four selected artists will have the incredible opportunity to perform live on stage with Orianthi as her band for a night. She will select the four musicians who will have their submission and performance from the night featured on Orianthi's social media channels. Travel and six nights' accommodation for each selected artist will be provided. This opportunity is open globally to musicians 21 years of age and older.

Musicians can begin submitting their work effective immediately and must submit no later than January 24, 2014 (all phases close at 10AM PST). The voting period runs from January 25 through January 31, with the winner to be announced on February 5.

For this competition, one additional artist as selected by the community and the host, Orianthi, will receive*:

A signed copy of Orianthi's new album, Heaven in This Hell

A mention on the BeMyBand social media channels

* The host will select from the top 10% of the highest voted submissions.