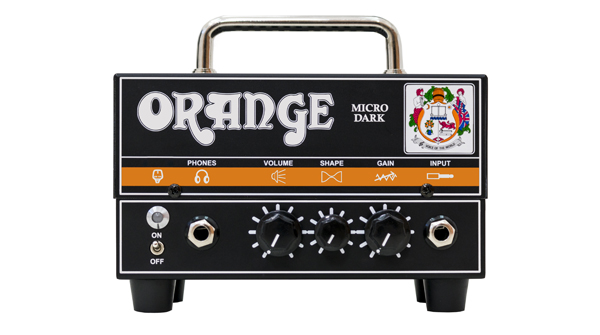 Hidden beneath the Micro Dark’s exterior is a wealth of sophisticated and assured tones courtesy of a new 12AX7 driven, high gain preamp. These range from classy and clean, to brash and mean, with more than enough grunt to satisfy the most observant disciple of distortion. Coupled with a solid-state power section capable of 20W of output and shocking levels of volume, the amp can be paired with any 8-16 Ohm speaker cabinet. Whatever the situation, the Micro Dark never fails to make a mockery of its miniature frame.

Other features include a transparent, fully buffered effects loop and headphone/line output with Orange’s signature CabSim circuitry - ideal for recording. With its matching PPC108 speaker cabinet, the Micro Dark makes for a perfect portable practice rig which also mics up superbly in the studio. To properly shake things up however, plug into a full sized Orange PPC412 and unleash the full potential of this remarkable micro amp head.

Nico Santora of Suicidal Tendencies agrees: “I’ll never forget when it was first shown to me, I was just like, ‘Wow, I’ve never seen a micro amp THAT small’. And then we plugged it in… and I literally lost my mind with excitement. The Orange Micro Dark is about to take over band practice. I’m able to plug into a full 4×12 cabinet, and it feels and sounds like a monstrous 100 Watt amp. I remember just staring at the thing wondering how it could produce such powerful tones! The Micro Dark really is a game changer.”