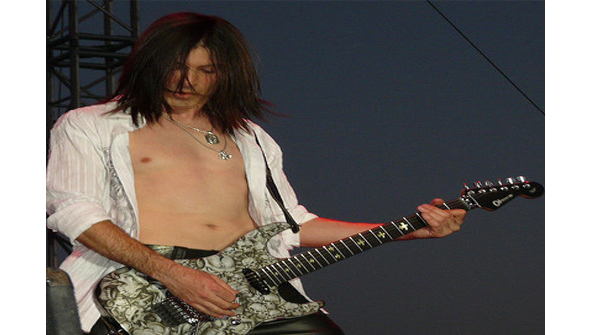 "We've heard this rumor lately that after [the release of thenew DOKKEN] record ["Broken Bones"] and [the touring cycle insupport of the CD] that Don might put DOKKEN down and do somethingdifferent. Would that piss you off if that were tohappen?"

"That's a really good question. We were in Bulgaria threeweeks ago or so - maybe a month at this point now - and I wasreally, really jetlagged. At six in the morning, I was sitting at abreakfast table with Herman Rarebell [former SCORPIONS drummer, whorecently toured with Michael Schenker], and there was nobody elsearound. We were just talking. And then Michael [Schenker] came in.And, of course, I'm a huge, huge fan of Michael - he's actually aninfluence of mine; I think some of those influences are apparent on[the new DOKKEN album, 'Broken Bones'], too. He came up to me, andhe said to me, 'We play an acoustical guitar tour together, you andme.' And I'm looking around like, 'Who are you talking to? Me?' Hegoes, 'Yeah, you and me playing the acoustic guitar together.' Iwas like, 'OK.' And, actually, Don was there, too, and [Michael]goes, 'And you [Don] will sing.' I actually didn't know that he wasserious. I don't know if Don thought [Michael] was serious. Butsure enough, I got a letter from [Michael's] lawyer a few daysafter I got home, saying, 'Michael is really excited about this.And 'Can you have Don start working on some music with him?' and soon and so forth. So we will see."

"Is that something that you would want to do?"

"Oh, yeah, man. I mean, it's Don singing and myself andMichael playing guitar. That would be a dream for me, because he'sone of my favorite players."

"Would that not reduce what you do to being more of a rhythmplayer behind Michael?

"None of that's been discussed, but I'm sure there will besome room for me to play as well."

The Classic Metal Show can be heard live onSaturday nights from 9 p.m. to 3 a.m. EST at www.theclassicmetalshow.com.