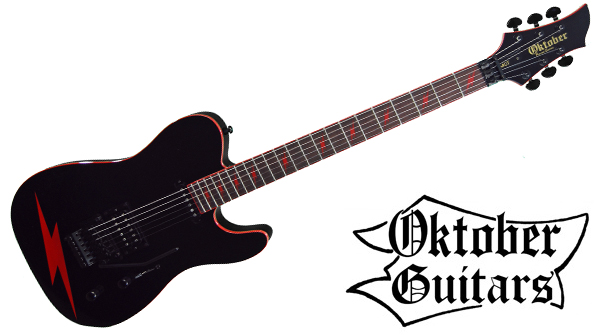 The MGT takes a traditional look and style and reinvents it withmodern day amenities.  Gone is the old school hard tail bridgeand it is replaced with a recessed Floyd Rose tremolo system. An Oktober Suckerpunch humbucking pickup is used in the bridgeposition to give the guitar more attitude and is balanced by a moretraditional Memphis single coil pickup in the neck position. The body, neck and headstock are highlighted with red body bindingand the infamous red Raven Flash streak across the body and inlaidthroughout the fretboard.

Formed in 1974 by brothers Mark and John Gallagher, Raven wenton to play a major role in the New Wave of British Heavy Metalalongside Iron Maiden, Motorhead, Diamond Head and JudasPriest.  With the guitar styling of Mark at the forefront ofthe Raven sound, the band continues to tour around the worldlighting the way for all those inspired by the NWOBHM.

For over 23 years, Oktober Guitars has been building quality,custom hand crafted instruments. A company started for musicians bymusicians, Oktober Guitars is on the cutting edge of today'smarket. Starting as a custom builder, founder and head luthier TonyLeicht wanted to also offer Oktober's customers an affordableoption to a custom instrument, without sacrificing quality orcraftsmanship.  The result is a reasonably priced import linecrafted to the same specifications as Oktober's custom madeinstruments. www.oktoberguitars.com.