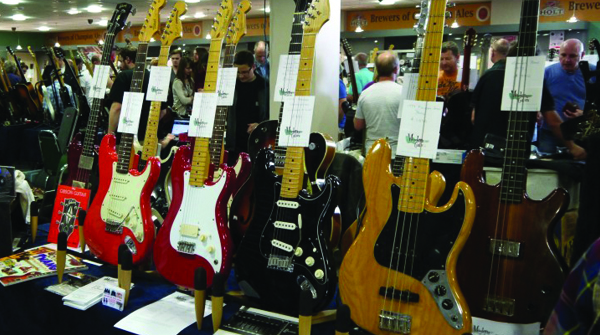 (PRESS RELEASE): This year celebrating thirteen successful years at the same venue, The Merseyside Guitar Show will take place on Sunday, 22nd November 2015 from 10am to 4.00pm at Aintree Racecourse Exhibition Centre, Ormskirk Rd, Liverpool, L9 5AS and this year promises to be the biggest and best Show yet.

Now one of the UK’s biggest regional Shows dedicated to guitars. Four floors with more than 100 exhibitors, collectors and dealers. Many national and independent stores, luthiers and dealers are attending.

On the live stage, we are delighted to announce that the Connie Lush Band are headlining. Connie is one of the most exciting performers on the international blues scene and she has been voted UK’s best blues vocalist no less than five times! On guitar duties is the sensational Steve Wright playing his Patrick Eggle Nashville Artist SW model. Steve is not only one of the foremost blues guitarists in the UK but has also composed music for several TV shows including Brookside, Grange Hill, Moving On and the theme to Hollyoaks.

Also appearing is singer/songwriter and 12-string virtuoso, Paul Brett, presented by Vintage Guitars. Paul has had an amazingly varied career, including spells as a performer, composer, journalist, broadcaster, film maker, cruise production director, author and musical instrument expert for the BBC’s Antiques Roadshow and Flog It.

Supplying rock classic covers for those who love their Queen, Led Zeppelin, Aerosmith, Eagles and the like, we have the five-piece classic rock covers band, Dr Strangelove – local favourites and Cavern residents.

The schedule is rounded off by superb acoustic folk duo, The Huers, with unusual instruments, delightful songs, great playing and wonderful harmonies.