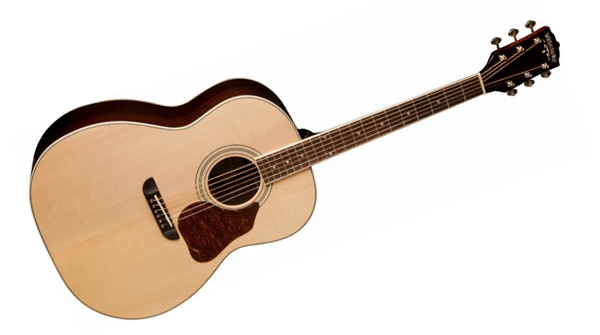 The latest Jumbo-styled body acoustic to be released by Washburn is a stunning recreation of one of the first dreadnought sized guitars made, the Lakeside Jumbo model. The Washburn LSJ743S Lakeside Jumbo Acoustic Guitar features a solid Sitka Spruce top, Rosewood back and sides and quarter sawn scalloped bracing for rich and resonant tone. Wilkinson tuners with butterbean buttons complete the LSJ743S Lakeside with a classic look.

PRESS RELEASE: Washburn originally introduced the Lakeside Jumbo model in 1912 and it is considered by many as the first 'dreadnought' sized guitar. It bridged the gap between smaller bodied parlour guitars of the late 19th and early 20th century and modern day dreadnought and jumbo acoustic guitars.  100 years later Washburn have captured the essence of that model with modern materials to provide a truly inspired, unique and special instrument with its very own voice.

Players looking for an alternative to a standard dreadnought but want to retain the volume and projection without the size of a jumbo will be especially attracted to the Lakeside Jumbo. Tonally this guitar is extremely versatile with a big, loud and deep low end and warm but crisp and articulate highs.

The Washburn LSJ43S is available in natural and tobacco sunburst finishes and features a solid sitka spruce top, rosewood back and sides and a quarter sawn scalloped sikta spruce bracing pattern.  It also has Wilkinson butter bean tuners and a 'period-correct' Washburn logo and headstock.

Find out more at Washburn