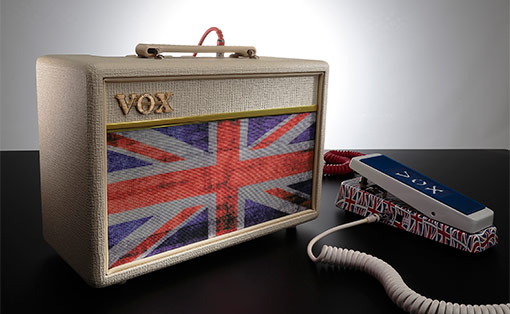 Korg and Vox have announced a range of new products today including a new amp, a new wah and two revolutionary new tuners. More info below

VOX introduces a bold new modeling technique that yields vastly improved sound quality and a more authentic playing experience. A longtime innovator of modeling technology, VOX Amplification has taken modeling amps to the next level with the VX I and VX II.

The Pathfinder 10 mini combo amp is compact, yet powerful, as it boasts 10 watts of power and has plenty of classic VOX tone to offer. Now for a limited time only, the Pathfinder 10 is available with a bold design of a worn Union Jack flag on the front face of the amp, indicative of its rock n roll history.

Whether you’re practicing at home, recording in a studio, or jamming with friends, the new Pathfinder 10 Union Jack is sure to grab attention.

VOX Amplification; the British amp company that’s been the face of rock n’ roll for more than fifty years has just announced a new clip-on tuner, the AC Clip Tune. Equipped with the signature VOX logo and the iconic diamond motif, its inimitable looks make it the perfect match for any classic VOX amp.

High precision, a colour LCD display, and a flexible clip mechanism demonstrate its quality as a tuner. With a timeless appeal and serious functionality, the AC Clip Tune is a unique tuner that will bring you precision and style. (more info...)

The PitchCrow-G is the most compact of all fully-featured clip-on tuners. Its streamlined design includes everything you need to tune accurately, quickly and is approximately 20% smaller and lighter than previous KORG models. Included with the PitchCrow-G is a vivid full-colour LCD and dedicated guitar/bass modes, as well as a new ultra-high precision fine tuning function that allows for accuracy as great at ±0.1 cents.