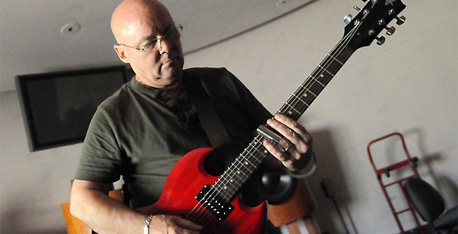 "Ronnie Montrose Live At The Uptown," a new DVD from the lateRonnie Montrose, is set to be released on the 1st May through thelate guitarist's website.

"Ronnie Montrose has been playing music for over 40 years. Andbelieve it or not, this is the one and only live DVD recording ofhis career. Ronnie and his band created a very wonderful eveningfilmed at the Uptown Theater in Napa, California. This DVD includesacoustic pieces, songs you never heard him perform before, and onesyou haven't heard him do for years and years and years. Thanks tothe fans and everyone involved, this was a magical evening for allincluding Ronnie and his band."

Pre-orders are already available at www.ronniemontrose.com and will follow thisfriday's tribute concert taking place at the Regency Ballroom inSan Francisco

The all-star bill, titled "A Concert For Ronnie Montrose - ACelebration of His Life In Music" will see Sammy Hagar reunite theoriginal Montrose band, along with Joe Satriani, to perform thegroup's landmark 1973 self titled debut album.

There will also be a variety of special guests, including manyof the great musicians that Ronnie played with over the years. Someof the confirmed artists include: Neal Schon from Journey, SteveSmith formerly from Journey, members of Tesla, Eric Martin from Mr.Big, Rickie Philips from Styx, Eric Singer and Tommy Thayer of KISSand Jimmy DeGrasso from Y & T and Alice Cooper.

Ronnie Montrose was born in San Francisco and moved with hisfamily to Colorado when he was two, returning back to his nativehome when he was 19 years old. In 1969, he started a band with BillChurch called Sawbuck, but that project got sidetracked when Ronniewas hired to do studio work with Van Morrison (Tupelo Honey), BozScaggs, Edgar Winter, Herbie Hancock, and others. In 1973, heformed his own band, Montrose, who recorded two albums together.The debut Montrose album went platinum and has been called thefirst American heavy metal album. In 1979, Ronnie formed Gamma, whorecorded four albums. Ronnie continued to record through the 1980sand 1990s, and Gamma put out their fifth album in 2005.