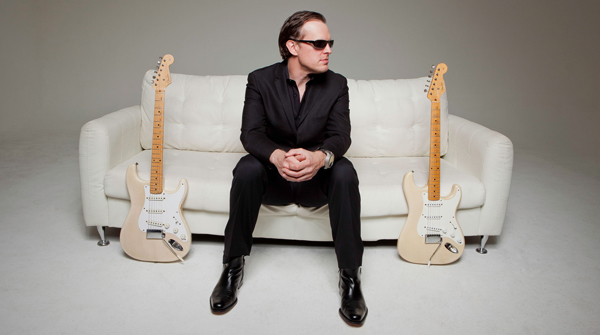 Joe Bonamassa is undoubtedly one of the hardest working  bluesman on the circuit. Since his 2000 inception the NY blues virtuoso has released 10 studio albums along with a host of live albums.

Bonamassa's latest studio effort, 'Different Shades of Blue', will mark his first release since 2012's 'Driving Towards the Daylight' which debuted at #2 on the Official UK Album Chart. In anticipation of the new record, Bonamassa has released a short film discussing the making of the album (which can be viewed below).

“It’s been a while since I’ve been involved in the writing on an entire album. So I decided I wanted to make a completely original blues album,” said Bonamassa.

“I’ve really had to push myself to make everything I do better than the last project. I know the fans expect it. And I feel like I owe it to the fans to give them an original record after all these years.”

Recorded at Studio At The Palms in Las Vegas, NV, 'Different Shades of Blue' was produced by Kevin Shirley (Black Crowes, Aerosmith, Led Zeppelin), who has helmed Bonamassa’s last fifteen projects, including his collaborations with Black Country Communion and Beth Hart.

'Different Shades Of Blue' will be released on CD, limited edition Digibook CD, LP (180 gram) in the UK on September 22nd (Mascot / Provogue).