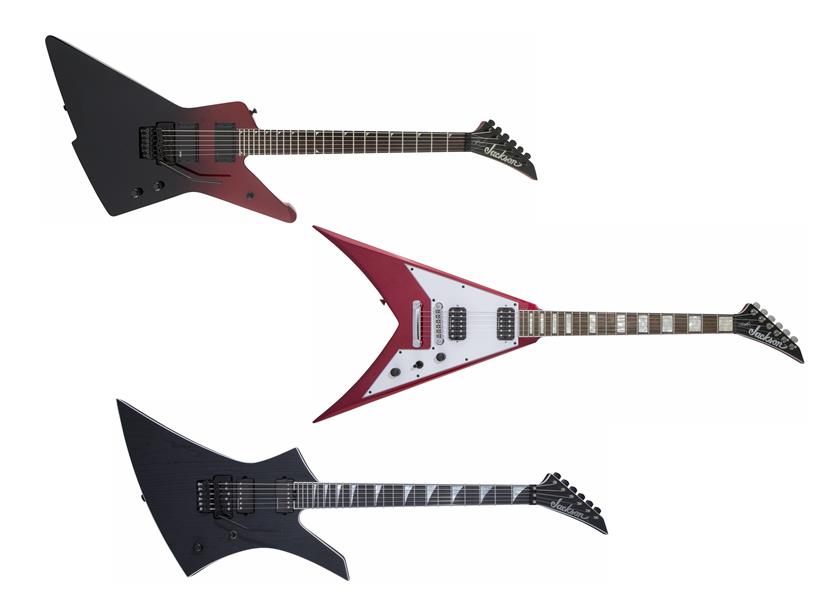 Jeff Loomis has seared his mark on multiple subgenres of metal with his smooth technique at breakneck speeds. His rhythmical style became central to Seattle-based progressive metal band Nevermore’s sound, while his two solo albums tore apart the technical metal scene and featured intricate fret work laced with soaring solos. As the current guitarist for the world renowned Swedish melodic death metal act Arch Enemy, he continues to build upon his legacy with the most astonishing riffs the genre has ever heard.

Jackson is thrilled to pay tribute to the gifted musician with the USA Signature Jeff Loomis Kelly™ model.

This signature Kelly axe is loaded with premium features including an ash body with a sandblasted ash top and Black finish for a distressed and menacing look. The body is paired with a one-piece maple neck-through-body with scarf joint and graphite reinforcement, providing the utmost stability against the rigors and ravages of the road. Shaped for speed, its 12”-16” compound radius bound ebony fingerboard features 24 jumbo stainless steel frets and mother of pearl sharkfin inlays.

Dynamic Seymour Duncan® Jeff Loomis Signature Blackouts active pickups give this metal monolith its roar of clear, articulate tones even when under the heaviest distortion. The neck pickup delivers smooth, glassy leads, while the bridge pickup sinks its teeth into more aggressive tones and sustain while maintaining its legato.

This metal behemoth is completed with a pointed 6-in-line headstock that is emblazoned with a chrome Jackson logo.

Def Leppard guitarist Phil Collen and Jackson have enjoyed an alliance that has spanned more than three decades now. Collen’s PC1 Dinky was one of the original Jackson signature instruments and continues to stand out in modern times with its staple exotic woods and unique Jackson Sustainer/Driver.

An absolutely stunning instrument, this limited-edition model is dressed in a Natural finish with a licensed Fender® Stratocaster® headstock and satin gold hardware.

Boston-based act Revocation has firmly established itself as one of the finest in today’s death metal and thrash metal genres. Heralded as one of modern metal’s elite guitarists, frontman Dave Davidson is also the driving force behind the band as it continues to evolve and challenge conventional metal norms.

The USA Signature Limited Edition Dave Davidson Warrior™ WR7 is an angular 7-string axe featuring a 25.5” scale length, caramelized ash body and three-piece through-body caramelized maple neck with graphite reinforcement and scarf joint. A hand-rubbed urethane neck back finish allows for comfortable and smoother playing, while the Luminlay® side dots guide your way up and down the fretboard on even the darkest of stages. The 12”-16” compound radius caramelized maple fingerboard with 24 jumbo frets and mother of pearl inlays is designed for highly technical playing—more curved by the nut for comfortable chording, it flattens out as you move up the neck for increasingly fast playing speed and wide bends without fretting out.

To meet Revocation’s propensity for building rich, complex chord voicings, Davidson teamed with DiMarzio® to create his own signature Imperium™ 7 pickups, which power this limited edition axe with dynamic tone and punchy clarity. Designed so that all notes ring through, from full-bodied, tight low end while using high gain amps to crystal clear cleans on non-distorted channels, these pickups are also highly responsive to harmonics. Tone can be further tweaked with the three-way toggle switch, single tone control and single volume control with push/pull pickup coil split for single-coil tone.

Djent forefather and speed demon Misha Mansoor has gained widespread acclaim as the mastermind behind the axe-centric progressive metal band Periphery. He’s known to impress the most discerning of metal fans with his steadfast, fleet-fingered technique, and his personally designed collection of Jackson signature Juggernaut instruments— including the Pro Series Signature Misha Mansoor Juggernaut HT6, HT6QM and HT7— is sure to set any shredder’s tone ablaze.

All models feature a basswood body paired with a bolt-on one-piece caramelized maple neck with graphite reinforcement, wrap-around heel and oiled back finish for greater playing comfort.  Atop the neck is a 20” flat radius caramelized maple fingerboard with rolled edges, 24 jumbo frets and offset dot inlays. Luminous side dots serve as position markers even on the darkest of stages, while the heel-mount truss rod adjustment wheel allows for convenient neck relief tweaks.

For more than 15 years, lead guitarist Phil Demmel contributed his hard-hitting, lightning-fast licks to thrash-and-groove metal outfit Machine Head. As Demmel forges ahead to his next chapter, he’ll be well-armed with a pair of all-new no-holds-barred metal axes that can hang with everything Demmel throws their way.

Soul-crushing sound emits from EMG® 81 and 60 humbucking pickups, providing a detailed intensity of thick mids and big lows with soaring high ends. The 81 bridge pickup cuts through the densest leads, while the 60 neck pickup provides your heaviest playing with harmonic clarity.

The Pro Fury PD sports a mesmerizing Red Tide Fade finish with a Floyd Rose® Special double-locking bridge system, while the Pro Fury PDT is draped in a stark Snow White finish with a black pickguard and a Jackson TOM-style adjustable string-through-body bridge.