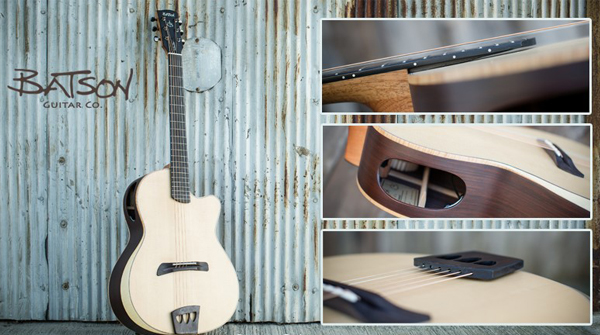 (PRESS RELEASE): After several years in development, master luthier Cory Batson has introduced his new line of boutique-quality, affordable acoustic guitars to the North American marketplace. The New Batson Acoustics are design-built to replicate the looks, sound, and feel of the more expensive, handmade Batson custom acoustic guitars known among professional players for their exceptional voicing and versatility.

In an industry first, Batson and KPBO luthier Charles Lee of Seoul, Korea developed new jigs, fixtures, and tooling to enable Batson to include many high-end features, previously only available on expensive, handmade guitars, to his new line of acoustic guitars. The New Batson Acoustics combine Batson’s hybrid, lattice braced designs and patent-pending tailpiece-bridge systems with carbon fiber reinforced fingerboards that float above the soundboard, allowing Batson’s guitar tops to vibrate more freely than standard X-braced guitar tops to create the signature voicing his custom guitars are known for.

Asked to describe the voice of the New Batson Acoustics, finger-style guitar celebrity artist, Lance Allen responded, “Think the thump of a forward-shifted D-42 infused with the mid-range sparkle and jangle of an Olson or Goodall; add a touch of natural reverb and resonance, and you’re almost there. What Cory has achieved is a real game changer.”

The New Batson Acoustics come in 3 Grand Concert size models. The Troubadour, designed for performing artists, features Sitka spruce tops with E.I. Rosewood backs and sides; the Americana, a songwriter model combines Sitka spruce tops with Mahogany back and sides, and the Gypsy, designed for finger-style players, features a Red Cedar top with E.I. Rosewood backs and sides. All models come with a super-thin matte finish that was designed to support increased soundboard movement and resonance.

Availability is limited. The new Batson Acoustic guitars are anticipated to become available in mid-July, 2016, and orders are now being accepted.

For more information on the New Batson Acoustics