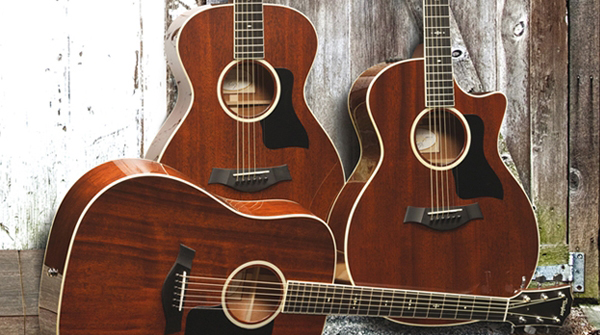 There's a lot to love about a rich, complex acoustic sound. That said, a guitar's tonal personality should fit comfortably into its playing context, and sometimes complexity can get in the way, like when other instruments are in the mix. When a more focused, direct tone is desired, a guitar with a tropical hardwood top, such as koa or mahogany, will often make a good choice.

Taylor revealled they're excited to renew their commitment to the all-mahogany guitar sound with the addition of mahogany-top models to the 500 Series, in every body shape, including the Grand Orchestra, as well as a 12-fret edition of the Grand Concert. The mahogany tops will be designated with a "2" as the second digit of the model name, so the naming conventions for the models will look like this:

Extensions of these base models include versions with electronics (e.g., 520e) and those with a cutaway and electronics (520ce).

Any sort of hardwood-top guitar tends to produce a natural compression, so it won't yield as quick a response as a spruce-top guitar will. As Andy Powers explained with the recent introduction of the all-koa Grand Orchestra K28e, there tends to be more of a subtle "roll-in" effect to a note.

"To put that into a more practical context for the player, it sounds like it's a really long, sustaining, very controlled attack," Andy says. Compared to a spruce-top mahogany guitar in Taylor's 500 Series, an all-mahogany steel-string produces a distinctive flavor. "It still has the fundamental, strong, direct sound you can expect out of a mahogany guitar with a spruce top - that dry, woody quality," he explains. "But the mahogany top will make it even more controlled, to where it starts to accentuate its unique sustain a little more."

"Punchy" is a word that's often used to describe the character of mahogany, particularly in the midrange.

"It's punchy in the sense that the notes you play are the notes you get," Andy elaborates. "That's what people mean by 'dry' tone. Many players will hear the response and say, 'Oh, it's right in my face. I hear just the notes that I played. I'm not hearing this sharp attack, or a long, ringing complex overtone mix.' So, the common description is a focused midrange punch."

That focused midrange character highlights some of the tonal differences between mahogany and rosewood, which tends to feature a more scooped midrange and ringing overtones. Bob Taylor spoke to the sonic contrast in an interview for Acoustic Guitar magazine back in 2010, describing a hardwood-top guitar like mahogany as "typically lo-fi, great for strumming and blues, but no church bell tones." In ensemble playing, those differences actually can work together nicely to create a complementary acoustic sound, as mahogany's strong midrange and rosewood's scooped mids fit together well without competing.

"Like koa, it's a fantastic wood for recording or stage use," Andy notes. "Because of its unique response, an all-mahogany guitar really flatters its pickups. And since its sonic imprint isn't a mile wide, it's a guitar that plays well with others. On a track with other guitar parts you don't want interference between players."

Depending on the body style, an all-mahogany guitar also makes a great option for players with an aggressive attack, due to the natural compression effect of the wood.

"I can play these guitars as hard as possible with the thickest pick in the world, and they sound great," Andy shares. "You don't have to play them that way, but they can take it. A mahogany-top guitar basically takes that huge abundance of raw energy and helps control it. That focused sound comes in handy. That's why some bluegrass players might prefer a mahogany Dreadnought over one with rosewood back and sides. The rosewood one might have too much ring for playing their rhythm parts on fast fiddle tunes."

Another big-body all-mahogany option, the Grand Orchestra 528, will produce a husky, burly voice that would also respond well to lively strumming.

"It's a guitar I would have loved to have seen Johnny Cash play," he adds. "I could see him playing 'Folsom Prison Blues' and just wailing on it. Or Elvis Presley. He was a fine rhythm guitar player. He would have sounded great on that guitar."

Smaller bodies like the Grand Concert 522, particularly the 12-Fret, yield a smooth, balanced, easygoing character that will work well for blues, country and ragtime picking, and the hardwood top can easily handle the kind of gritty, snappy plucking that adds funky tonal color to roots music. Give the wood a little time to open up and you'll have a guitar with serious mojo that injects a dark, warm, sweet and surprisingly dynamic vibe into a tune.

The addition of mahogany-top models literally changed the complexion of the 500 Series, inspiring a design overhaul that helps express the identity of these guitars. With the mahogany top's rich, saturated color and prominent grain front and center, Taylor's development team, led by Andy Powers, embraced the old-school aura that reflects mahogany's guitar heritage. He relates it to Taylor's recent neo-vintage treatment of the rosewood 700 Series.

"After we re-designed the 700 Series with all-ivoroid appointments, players really flocked to it," he says. "The sentiment was like, "This isn't my dad's guitar, this is more like my granddad's guitar,' but with all the refinements of modern guitar-making techniques. So we brought more of that aesthetic to the 500s."

A black pickguard adds a bold visual counterpoint to the mahogany tops (spruce- and cedar-top models will retain the faux tortoise shell version). Other new appointments include ivoroid binding, an ivoroid rosette, and an ivoroid Century fretboard inlay design that comes from the same family as the 700 Series Heritage Diamonds inlay motif.

Like Taylor has done with the launch of new Grand Orchestra models, the mahogany-top 500s debuted with 100 First Edition models for each body shape. Premium features include an additional Century peghead inlay, CV bracing, and a custom First Edition label and case plate. Once the guitar is registered, the owner will receive a custom First Edition guitar strap, a numbered certificate of authenticity, and a special commemorative booklet. After the First Editions are produced, the models will officially join the 500 Series. To sample an all-mahogany guitar, visit your local Taylor dealer.