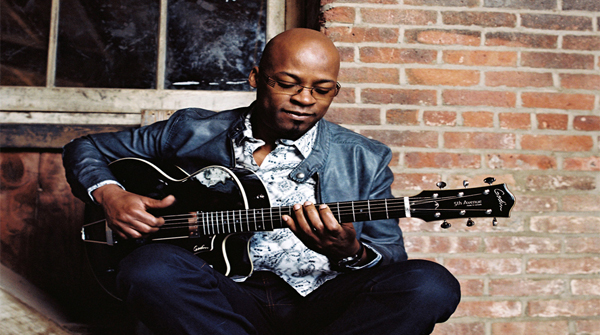 "Heritage" is the anticipated follow up to his twoprevious acclaimed Blue Note recordings, Karibu (2008)& Mwaliko (2010). The guitarist/vocalist from Benin,West Africa who has fittingly been described as a "gentle virtuoso"by Jon Pareles of the New York Times, through his fusion oftraditional West African sounds with his incredible sense ofgroove, complex time signatures and modern jazz harmonies.

Lionel Loueke has long been a fan of hisGodin Multiac nylon string guitars for both liveperformances and studio recordings. The Multiac series of guitarsare renowned for their exceptional amplified acoustic sound andfeel, all without feedback in live & loud settings. Loueke'snylon string models of choice include the Multiac Grand Concert SAand Multiac Grand Concert Duet Ambiance. However, on this latestalbum, he has gravitated towards the steel string side of the Godinline-up. Most notably, the Godin Multiac Spectrum Steel SAelectro-acoustic and the Godin 5th Avenue Jazz with a floatingmini-humbucker jazz pickup.

"The 5th Avenue is the perfect addition to my Godin guitarsbecause of its lightweight and its incredible and versatiletone," says Loueke of his 5th Avenue Jazz with a lustrousPiano Black high-gloss finish.

With its early beginnings in 1972, the Godin Guitarfamily now includes 7 lines of guitars. These include the renownedGodin & Richmond electric lines, as well as the finely craftedacoustic lines such as Seagull, Simon & Patrick, Norman, Art& Lutherie and LaPatrie nylon stringed classical guitars. GodinGuitars is also the manufacturer of the revolutionary TRIC acousticguitar case and is the North American distributor of high-endItalian made SR Technology acoustic amplifiers. Based in MontrealQuebec, this Canadian company has 6 factories, 5 of which arelocated in the Eastern Townships of Quebec and 1 located in BerlinNew Hampshire.