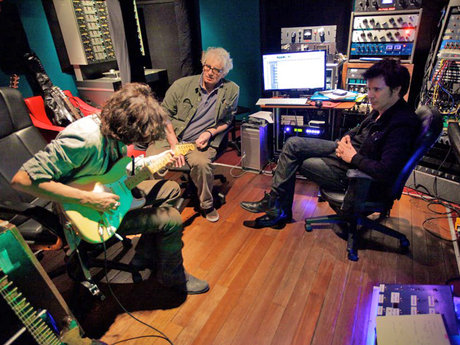 Joe Perry has revealed that Aerosmith are almost done with their new album. Speaking about the status of the band's 15th studio album in an interview with Rolling Stone Magazine Perry explains, "It's really close. We've started to mix. We've mixed a couple of the songs already, but I guess this week we're really kind of rolling into mix mode. We have a couple of tracks left to finish up, just to put some overdubs on, but we're kind of going from the final, final recording tracks to mixing this week."

When asked about the comparisons with the band's last original studio release "Just Push Play", the guitarist says "Let's say they're polar opposites. The whole attitude of making this record and the way that we went about it is so opposite. I mean, the band stayed in the room and everybody had riffs, songs. I can remember writing some of the riffs 20 years ago; they've been kind of bubbling under. Steven and I would look at each other and go, "We gotta use that one," and they'd always end up somewhere. A lot of these riffs that we love, that are really part of our inner Aerosmith lexicon, are now songs, finally.  So the whole process was different. The record's gonna sound modern and hi-fi."

There is no release date date set for the as yet un-named album, however Perry does reveal, "We're releasing a new single in three or four weeks, and that is going to open the door."