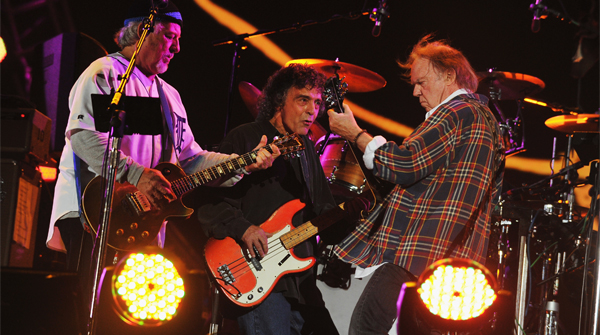 Neil Young and Crazy Horse have been forced to cancel a number of their upcoming European dates, including two shows in the UK, due to guitarist Frank "Poncho" Sampedro breaking his hand.

The folk-rock outfit was due to perform at the Liverpool Echo Arena on August 18th and at the London 02 on the following night. They will also no loner be headlining Belgium’s Pukkelpop festival (August 15 – 17) and have also called of shows in Norway, Denmark and Germany.

The band has released a statement which reads:

“Due to an accident involving Crazy Horse, the remaining dates on the Neil Young and Crazy Horse tour of Europe and the British Isles have been cancelled. We are sorry for any inconvenience this causes to our fans or the festivals where we were scheduled to appear. As you must be, we too are disappointed at this unfortunate turn of events.”

The cancelled shows were Young's first UK gigs with the Crazy Horse line-up of Frank 'Poncho' Sampedro, Billy Talbot and Ralph Molina since 2001.