NAMM 2016: Taylor Ushers in a 12-Fret Guitar Revival with New Models Across the Line 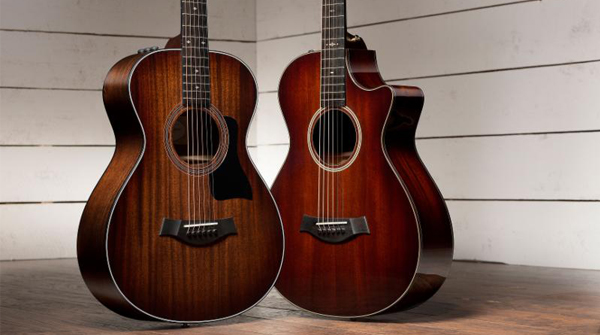 (PRESS RELEASE): Taylor Guitars is adding to its modern revival of the 12-fret guitar with an expanded suite of player-friendly 12-fret models for 2016.

The 12-fret guitar, which claims a heritage that's rooted in the early days of the steel-string acoustic guitar, has enjoyed a resurgence in recent years, and Taylor's refined 12-fret design strokes marry signature playability with voicing enhancements that offer players a uniquely inspiring playing experience.

Part of the appeal stems from the design's compact playing framework, which blends Taylor's comfortable Grand Concert body style with the 24-7/8-inch scale length and the shorter 12-fret neck configuration to create a slinky handfeel and easier fretting. Compared to the 14-fret design, the 12-fret's different neck-to-body relationship (the neck meets the body at the 12th fret) pushes the bridge position closer to the more flexible center of the lower bout. The result is surprising tonal power and midrange warmth for a smaller body. The appealing feel and sound make a Taylor 12-fret a great addition to one's guitar toolbox, suggests Master Guitar Designer Andy Powers.

"The 12-fret is very accommodating of many styles," he says. "It's comfortable, and there's a nice singing quality that you can get out of that guitar. I like the vibrant character of the midrange. This design is very physically efficient, so it has strong projection.  Despite its smaller physical size, it sounds like a huge instrument. I like that I can get this husky power from a compact guitar."

Until the 1930s, most guitar necks met their bodies at the 12th fret, but the popularity of the banjo, which featured longer necks, spurred a shift toward guitars with a 14-fret neck, which is still common across the industry today. The unique geometry of the 12-fret paired with Taylor's design nuances, including the company's patented, precision-fit neck, gives the guitars more "midrange swagger," Andy says. "There's a little more attitude. By moving the bridge to a more central location in that lower bout, we get more warmth and power because the top is being articulated from a more flexible spot. At the same time, there's a sleek handfeel due to the way the top is flexing and responding every time a string is struck."

For more information on Taylor Guitars