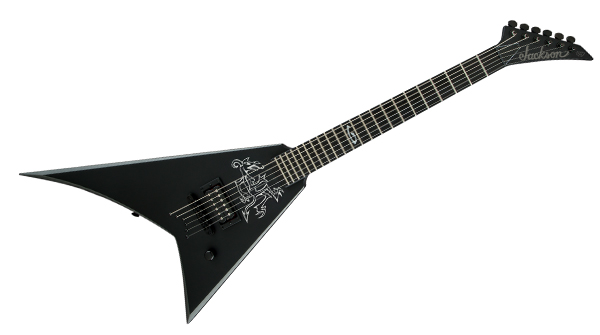 French metal band Gojira blends thrash and progressive elements to create a groove metal sound like no other. Jackson collaborated with their acclaimed guitarist, Christian Andreu, to create his signature version of the classic Rhoads design. Tricked out for even more high performance and thunderous sound, this sleek instrument is packed with Jackson DNA and is available in both USA and affordable X Series versions.

Andreu’s demanding playing requires tone and sustain that can shake the foundations of the earth to their very core, and his USA Rhoads uses a Custom Charvel MFB humbucking pickup for razor-sharp tones with a hint of warmth. Twenty-two jumbo frets (with a Gojira “G” inlay at the single 12th fret) top the ultra-fast 12”-16” compound radius fingerboard. Jackson sealed die-cast machines and adjustable compensated strings-thru-body bridge create colossal tuning stability and accurate intonation along the entire length of the genuine mahogany neck.

This sleek instrument features a Satin Black with Gray Bevel finish, a unique Gojira Dragon design on the body with all-black hardware and a Jackson pointed 6-In-Line headstock for classically sophisticated metal aesthetics. Engineered for sterling playability, crossed with Jackson’s renowned style, the Christian Andreu Signature USA Rhoads cranks out mile-wide riffs and leads as fiery as its namesake.

Andreu’s RRXT Rhoads uses a neck-through-body design with mahogany wings for increased vibration transfer, resulting in sustain for the ages. A single Seymour Duncan® HB-102B humbucking bridge pickup powered by an alnico 5 magnet allows for razor-sharp high-output tones with a hint of warmth for flavor. Twenty-two jumbo frets top the ultra-fast 12”-16” compound radius fingerboard, and similar to the USA version, the RRXT features a variation of the Gojira Dragon logo on the body of the guitar, all-black hardware, a Jackson reverse 6-In-Line headstock, sealed die-cast machines and an adjustable compensated strings-thru-body bridge, in addition to graphite reinforcement rods.

As modern metal master Chris Broderick expands his portfolio with new band Act of Defiance, he has also added to his collection of Jackson signature guitars with new U.S.A. six- and seven- string hardtail Soloist models.

Bassist David Ellefson has reigned as a thrash bass godfather, garnering worldwide acclaim as a co-founding member of “Big Four” thrash innovator Megadeth and widely known for his fleet-fingered, hard-hitting style and versatility. Simply put, nobody shreds a bass like Ellefson, and Jackson is proud to have his name on several new formidable bass models.

Redesigned ergonomic contours on the new CBX IV and CBX V provide the perfect platform for launching a musical assault— the upper contour provides a comfortably stable anchor for pick or fingerstyle playing alike while the lower contour provides perfect balance when propped on a knee for monitor stands.

The CBX IV offers a basswood body, 12”-16” compound radius rosewood fingerboard and a Jackson HiMass™ 4-string bridge to sharpen notes’ attack for extra punch and clarity, granting enhanced sustain without significantly altering the instrument’s fundamental tone. An earth-shaking pair of EMG® HZ35 active humbucking pickups in the neck and bridge positions provide plenty of girth and cut as an active 3-band EQ bolsters their native power, shaping and refining it for maximum impact and versatility. The blend knob allows for mixing the pickups to taste—add more of ?the neck pickup for a touch of warmth, or bring? up the bridge pickup for more cut.

The CBX V also features a basswood body, a Jackson HiMass 5-string bridge and a pair of EMG® HZ40 active humbucking pickups in the neck and bridge positions that provide plenty?of girth and cut as an active 3-band EQ bolsters their native power, shaping and refining it for maximum impact and versatility. Similar to the CBX IV, the 5-string model also features a 12”-16” compound radius rosewood fingerboard and a blend knob.

Limited to only 30 pieces, the 8-string guitar has all-black hardware and Jackson’s mother of pearl piranha inlays as well as a Jackson 4x4 AT headstock for dark, elegantly sophisticated metal aesthetics.