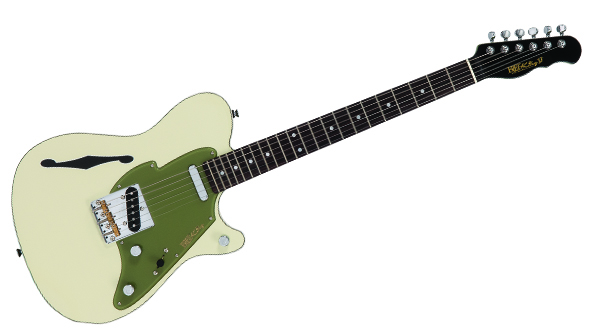 A world-class musician and virtuoso guitarist who has collaborated with the likes of Elton John, Luciano Pavarotti, Bonnie Raitt and Bob Dylan, John Jorgenson’s fretboard fireworks on The Hellecasters albums alongside Jerry Donahue and Will Ray remain favourites of guitarists everywhere, and with such an eclectic mix of genres, John needs a versatile guitar that can slip seamlessly from one style to another.

A Wilkinson/JJ WVOBT bridge pickup matched to a WTN/JJ neck pickup are coupled with two auxiliary ‘ghost’ coils under the JJ’s unique pickguard. These are activated with a push-push switch on the tone control, and as per John’s request these switch between single coil tones associated with a guitar of this style and a true hum cancelling noise reduction with no perceptible change in sound or tonality. We believe this is the first time any company has achieved this and it is a feature that John has been pursuing for many years now, even soliciting the help of Leo Fender himself to try to achieve this groundbreaking setup.

Adding to this versatility is the ‘Vari-Coil™’ (activated by the 3rd control knob on the lower front bout) which dials in extra boost on the bridge pickup when John needs to ‘take it over the top’!

"The very first time I met Trev back in the early 80s I liked him right away” says John. “He had all the knowledge and creativity regarding guitars without any of the superior attitude that seemed to always come along with that knowledge, especially in the guitar world. He always seemed to have already designed something that I had wanted and wondered if it was possible to make! Already having enjoyed a number of Trev's innovations over the years, it's an absolute treat to be able to collaborate on a guitar with him now. I'm really excited about what we are coming up with and think other players will be too!"

"Anybody who knows John, (says Fret-King designer Trev Wilkinson) knows he is a guitarist’s guitarist as he commands so many styles and genres of music”. He continues "We’ve known each other for quite a few years now and I am always amazed at his imagination when it comes to designing his instruments. It’s what I like to call a friendly guitar, but is still unique in its own right - very much like John himself!"

The Black Label ‘JJ’ oozes classic style, holds its own in every playing situation and is an invaluable addition to any guitarist’s arsenal.

Visitors to this year's NAMM Show can check it out at the JHS/RBI Music Booth 5279 Hall B.