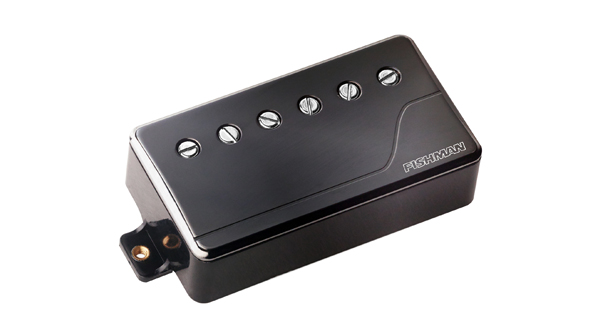 (PRESS RELEASE): Among the many benefits of the groundbreaking Fluence technology, is its ability to create and sculpt multiple voices that evoke the best tones of pickups past. With the Signature series, Fishman R&D has collaborated with three leading artists to recreate the voices in their musical imaginations.

Each set of Fluence Signature pickups incorporates two unique voices that each player had been searching for, and may have achieved across multiple instruments, but are now available at the flick of a switch.

As Devin Townsend puts it, “Typically, I’ve done a record of brutal heavy metal, followed by a new-age or country record.  And because of that, in the past I have had to work with two very distinct groups of equipment in order to achieve what I’m going for. And now, for the first time in my career, what I use in the studio is exactly the same as what I use onstage. It’s all the same thing. There’s no special guitar that I use at home, no special pickup, same guitar, same pickups,my Fishman Fluence Transcendence set.”

World-renowned Telecaster icon Greg Koch was searching for the perfect direct replacement pickups for his guitars. The result of his collaboration with Fishman is the Greg Koch Gristle-Tone set. Due to the unique nature of the Tele, each Gristle-Tone set includes a full assembly that incorporates two pickups, Volume and Tone pots, and a ¼” output jack with USB input for the integrated lithium-ion rechargeable battery pack. The set also incudes a completely assembled, prewired, drop-in control plate with three-way switch and push-push voice selector button.

Says Greg, “I’m happier than a Sasquatch in heat during ‘Sasquatch Week’ with my Fluence Pickups. They’re the answer to my tonal dreams. They sound so good, it’s almost hard to believe.”

Deftones guitarist Stephen Carpenter is a player’s player, preferring to concentrate more on his music than equipment. “I was never the super-critical guy, I’m not much for specs, but I like clean, full sounding pickups. When I was first starting out, I was using a passive, overwound humbucker. And in 2000, when I started playing 7-string, I used the active pickups that most people used at the time because they worked fine – simple as that.”

When it came to Fluence, “I was introduced to them by my guitar tech, and I’ve been offered my own models multiple times in the past and they never really came to fruition. But we put them [Fluence] in, I jammed on them for 45 minutes and thought ‘these things are freaking great,’ I didn’t want to stop playing. Playing Voice 2 was like going back to my original overwound passives, which ironically are some of the same pickups that were used in creating the sounds for the Fluence.”

Like all Fluence pickups, Steph’s signature set is multi-voice. Voice 1 is “Like the original Modern Fluence sound that I love, but tweaked a bit in the midrange.” About Voice 2, he states,“This is my custom voicing with some tone and gain tweaks to give it that extra heat and edge.”