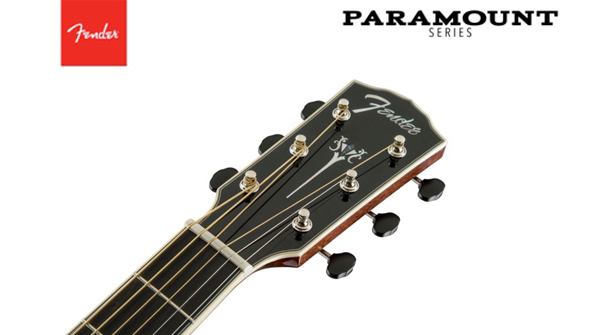 Introducing the first series in a new generation of performance acoustics.

The series includes Dreadnought, Parlor and Triple-0 models in both Standard and Deluxe versions. Each of the all-solid wood guitars in the Paramount Series reflects Fender’s great tradition of craftsmanship and blend both legacy design elements and modern features across each model in the series, at an affordable price.

“Fender recognizes a modern musician’s need for an all-purpose instrument that takes them through the entire musical journey, from writing and recording to performing on stage. This product reflects the best of Fender’s DNA,” said Richard McDonald, EVP of Fender and SVP Fender Marketing.

In addition to solid top and sides crafted from premium tone woods, each guitar offers many legacy design elements of classic ‘60s Fender models. These features include checkerboard purfling and rosette, pickguard shape and abalone and mother-of-pearl “Concert Tone” fingerboard inlays on Deluxe models. All-new Fender- and Fishman®-designed PM preamp systems are specifically voiced for each body shape in the series, ensuring complete tonal control and variation. The series will be available to consumers in February 2016.

The Paramount Series Deluxe instruments feature vintage appointments with craftsmanship players expect from true high-performance acoustic guitars. Crafted from solid East Indian rosewood back and sides and Sitka spruce top and equipped with quartersawn scalloped “X” bracing, the Deluxe models are designed complex, resonant tone in mind. The models also feature a “C”-shaped mahogany neck with ebony fingerboard. The Deluxe Dreadnought, Parlor and Triple-0 models are available in Natural and Vintage Sunburst and each includes a humidifier and hardshell case.

The Paramount Series Standard models are crafted from solid mahogany back and sides and Sitka spruce top and equipped with quartersawn scalloped “X”-bracing, producing a rich tone with ample volume. The models also feature a “C”-shaped mahogany neck with rosewood fingerboard. The Standard Dreadnought, Parlor and Triple-0 models are available in a Natural finish and also include a humidifier and hardshell case.