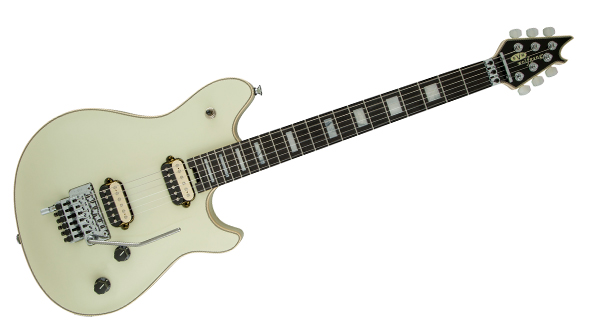 EVH has added brand new colors to its 2016 lineup, including an Ivory finish for the EVH Wolfgang USA.

The EVH Wolfgang USA guitar is built to Eddie Van Halen’s exact specs and has every single feature of the Wolfgang guitars he himself plays onstage and in the studio.

“Everything that I’ve built, destroyed, stumbled onto, learned and experienced is in this guitar,” Eddie Van Halen said. “Every aspect and component of this guitar has been examined and upgraded to the highest standards possible: stainless steel frets, double-potted custom-wound pickups, five-piece binding on the matching body and headstock, custom-made signature tuning machines and Floyd Rose® bridge, new low-friction pots, and the list keeps going. We left no stone unturned.”

Get massive sound, speedy playability and spotlight-ready style in the original Wolfgang that started it all, now in a striking new Ivory finish.

The EVH Wolfgang Special, also road-tested in arenas around the world, is a purebred music-making machine that is now available in three new eye-popping finishes: Matte Army Drab, Satin Red and Gold.

The robust graphite-reinforced quartersawn maple neck—carved and rolled to EVH’s exacting specifications—supports a speedy 12”-16” compound radius maple fingerboard, facilitating energetic riffing and blazing leads. Twenty-two jumbo frets take every bend with ease without affecting the instrument’s natural tone, allowing every note to ring true. The crystal clear Custom Designed EVH® Wolfgang Humbucking pickups are mounted directly to the basswood body, supplying girth and sparkle, as well as near-endless sustain to power chords and melody lines. The rock-solid EVH-branded Floyd Rose Locking Trem combines with the Floyd Rose Locking nut to maintain precise tuning, no matter how insane the whammy-bar histrionics get. The EVH D-Tuna retunes to Drop-D and back with strict accuracy at the mere flick of a finger, while the low-friction volume knob allows for speedy violin-like volume swells with ease while the tone knob resists easy turning—avoiding unwanted tonal shifts during fast and furious playing.

Released late last year, the EVH 5150III 15W LBX guitar amp head will continue to be a centerpiece of the 2016 lineup.

The diminutive, easy-to-carry “lunchbox” head is packaged with plenty of mighty tone and crunch. With five JJ ECC83S (12AX7) and two JJ EL84 tubes – for incredible high gain sound – it performs like an arena-filling champ. Two flexible channels, the famous EVH Blue “Crunch” and Red “Full Burn,” combined with the familiar low/mid/high/presence tone controls, a global resonance knob and a 1/4” power switch make it easy to dial-in everything from subtle overdrive tones to the roaring Variac-less “brown” sound.

“This is one bad ass little amp…a beast in a box!” said Eddie Van Halen.

The amp head also includes a footswitch to effortlessly switch between channels.

Lastly, EVH has also added the EVH 5150III Micro Stack to its accessories line. Perfect for practicing in a dorm room or office, this miniature sized one-watt single-channel amplifier features a single 3”speaker and a full set of Gain, Volume and Tone controls to dial in clean or gritty sound. Includes a headphone output jack for silent practice.