NAMM 2014: Radial Unveil the Next Generation Bassbone: the Bassbone OD 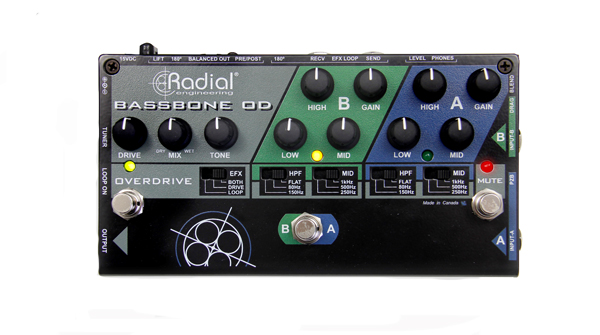 The Bassbone OD is a bass preamp with two instrument input channels, each of which is fully equipped with level control, a semi-parametric equalizer and low frequency resonance filter. Channel-1 is further equipped with Drag™ Control load correction to optimize the tone and feel when using a vintage passive instrument such as a Fender bass.  Channel-2 takes a different slant with a PZB booster that increases the sensitivity and load to 10 meg ohms to optimize it for use with piezo transducers as commonly used on upright bass. Toggling between channels is done using a footswitch and both channels may be mixed together by depressing the blend switch should a dual pickup system be in use. Outputs include a ¼' instrument level output to feed the on-stage amplifier plus a low-Z balanced Radial DI box output to feed the PA system. The XLR output can be assigned pre or post effects to suit the engineer's preference. A separately buffered tuner output works with the mute footswitch for quiet on-stage tuning.

According to Radial President Peter Janis:

"Since we launched the Bassbone a decade ago, it has become one of the most successful bass preamps on the planet, having been adopted by many of the world's top bassists including Marcus Miller, Victor Wooten and Tony Levin just to name a few. Over the years, we have had many conversations with artists on how we could improve the Bassbone. Some of the requests we received included a mute footswitch for quiet tuning, the ability to have the effects loop active at all times and the option to elegantly switch between passive, active and upright basses."

"We also had many conversations regarding the use of distortion on bass - including the type of overdrive bassists would like to use, and more importantly, what typically does not work when applying overdrive or distortion to bass signals. We quickly discovered that in order to deliver a solid bass foundation and the natural tone of the instrument, you have to maximize the frequency response, retain the dynamics and introduce the ability to 'mix in' the dry original signal with the distortion. And once we got started... well, we kept on going until we got it right!"

For bassists who employ effects, both input channels can share the same pedals by connecting via the built-in send & receive effects loop. This is augmented with an on-board bass overdrive with control over the drive level, tone and a wet-dry mix that lets you add slight grit or over the top distortion to the signal path. The OD footswitch may be assigned to the loop, overdrive or both. Finally, a built-in headphone amp with 3.5mm output lets you use the Bassbone OD on the bus for those long drives between gigs.