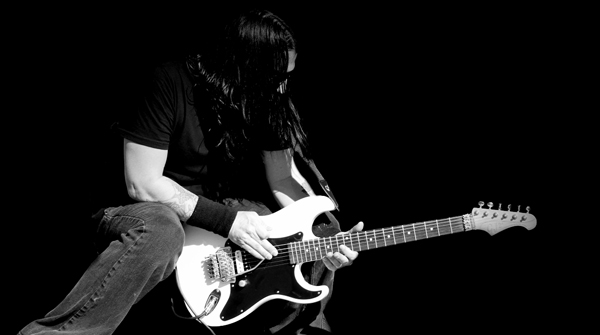 GJ2 Guitars is set to debut a new guitar model at NAMM in January 2014: The “Triple M” (aka the “Mick Murphy Model”), specially created by Grover Jackson for heavy metal guitarist Mick Murphy of My Ruin and Chevy Metal.

The “Triple M” guitar will be unveiled during the 2014 NAMM Media Preview Day on Wednesday, January 22 at 11:30 a.m. in the Anaheim Convention Center. Mick Murphy, along with GJ2 partners Jon Gold and Grover Jackson, will discuss and demo the guitar on stage.

The new GJ2 Mick Murphy model is a stripped-down, straight-ahead rock machine that looks and plays like a rocket. Made for the “Master of Heaviosity” and bearing a likeness of his trademark =MM= signature, it features a single humbucker with a hard-tail bridge, making it ideal for high-octane, tuned-down riffing. The =MM= will be offered in new colors exclusive to the model. The design is based on the iconic collaboration between Grover Jackson and Randy Rhoads from the dawn of the ‘80s that became the original “RR” model (later evolving into the GJ2 Concorde), which first inspired Mick Murphy to take up the guitar.

In addition to his role as lead guitarist/co-composer for D.I.Y. metal stalwarts My Ruin (fronted by Mick’s wife, vocalist Tairrie B Murphy), Mick has been moonlighting with Chevy Metal, a ‘70s-style cover band led by Foo Fighters drummer Taylor Hawkins, with bassist/vocalist Wiley Hodgden. This led to a new recording collaboration between Murphy, Hawkins, and Dave Grohl in a side project called “Birds of Satan”.

To cap off an already full year, Mick was recently recognized by the OC Weekly in their list of “The 10 Best Metal Guitarists” (ranked #3, after Tony Iommi and Jeff Hanneman).

Grover Jackson and Mick Murphy have more in common than an appreciation for Randy Rhoads and fast guitars. Coincidentally, the luthier (GJ) and shredder (MM) both hail from Tennessee and met on their shared birthday, July 17, at a Chevy Metal gig. After the show, Grover and his GJ2 partner, Jon Gold, surprised Mick by signing and presenting the “loaner” guitar he had been playing—the first prototype of the GJ2 Glendora “Spirit of ‘79” model—as a birthday gift. Since then, Mick has added another GJ2 guitar to his arsenal: a black Glendora model featuring a blocked “Habanero” brand non-locking bridge for multiple tunings.

A longtime favorite in Mick’s guitar collection has been his vintage “RR” Jackson model made by Grover Jackson back in the ‘80s. Now he’s excited about the prospect of playing an updated version—bearing his own initials—built using modern production methods by the original designer.

“My GJ2 guitars are so awesome that I no longer want to play anything else. The rock-solid tone, relentless sustain, singing clarity, and amazing feel of instruments crafted with pride by the master (Grover Jackson) make them the best guitars I've ever had the pleasure of playing. I’m proud to be a part of the GJ2 family.