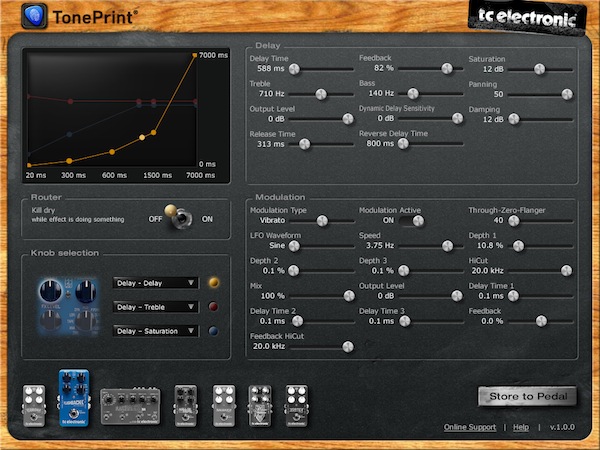 TC Electronic TonePrint Pedals take it to the next levelwith a Free editor. Now the ability to create your own TonePrintsis here.

The Toneprint Editor allows guitarists to build their own customversion of a Toneprint editor from the ground up, from sounds tothe range of knobs and everything in between. An intuitiveslider-based UI, realtime changes and easy storing of sounds allowsguitarists and bassists alike to easily and quickly craft thesounds they want to hear and pair them with the best TC Electroniceffects out there.

But what really sets the TonePrint editor apart is the depthwith which guitarists and bassists can craft tones. Far from'be-all-end-all' pedals where the only real difference is whichpreset you load into the pedal, the TonePrint Editor starts atzero, and from there anything is possible, from the function andrange of knobs to effect parameter behavior and everything inbetween.

Tore Mogensen, Product Manager for Guitar at TC Electronic adds:"TonePrint turned into the perfect storm. Guitarists love theeffects and love to download TonePrints via the app and from theweb and because they dug the sounds all those famous guitaristsmade so much, their desire to have a go at it themselves grew. Andthat made us want to deliver the editor to the guitar communitywhich makes TonePrint unique in the amount of sounds that trulyrepresent everyone who plays guitar, from the biggest star to thededicated tone tweakers out there and that makes TonePrint as aconcept even stronger - it's all of us making these great sounds. Ilove the thought of a young aspiring guitarists maybe creating thenext classic reverb tone and people taking it and tweaking it toperfection - or what they see as perfection, anyway. It's a reallyorganic and cool way of looking at things and since we offer theeditor for free, everyone can join and we have really cool plansfor expansion of this concept in the future!"