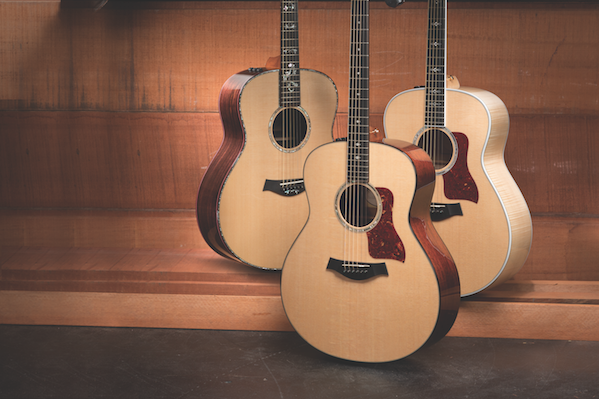 Taylor Guitars are set to unveil a new body shape in the GrandOrchestra Models at NAMM this weekend. We're huge fans of Tayloracoustics here at Guitar Interactive having reviewed many of therecent additions to the Taylor family and from what we've seen sofar, these new guitars will be equally as impressive.

PRESS RELEASE - Taylor Guitars is unveiling thenext body shape in the evolution of the company's guitars:the Grand Orchestra. The new model, which makes its officialdebut at the NAMM Show, boasts Taylor's boldest, richest voice, onethat manages to blend low-end power with surprising balance andresponsiveness for a big guitar. Players are sure to be impressedby the Grand Orchestra's versatility: Aggressive strummers willlove the robust output, while fingerstyle players will enjoy thedynamic range and sensitive response.

Last year, the company was inspired by a desire to revoice theTaylor Jumbo, but Taylor's design group instead opted to start fromscratch and rethink the possibilities of a modern big-bodiedguitar. Taylor master luthier Andy Powers began the design processby experimenting with body dimensions. He wanted to capture some ofa Dreadnought's robust tonal personality to produce big, round,richly solid notes. Slightly longer than a traditional Dreadnought,the Grand Orchestra features a tighter waist and a wider bottombout to heighten the tonal properties. The body depth was alsoexpanded to increase the air volume. "Bob Taylor has compared it tothe lungs that support someone's voice," Powers explains. "Bycreating a bigger 'lung,' you have the bigger, fuller, morepowerful capacity to support lower frequencies." To maintainbalance across the entire tonal spectrum, Powers designed a newbracing scheme. A hybrid of scalloped and parabolic bracing, thedesign causes the top and back to pump like a speaker cone, makingthe guitar loud and uniformly responsive from lows to highs. Whatemerged from the new shape was a strong, complex voice with thekind of tonal balance that fits perfectly into Taylor's family ofshapes and sounds.

The Grand Orchestra is the fifth body shape in Taylor's acousticguitar line, joining other proprietary Taylor shapes including theGrand Concert, Grand Auditorium and Grand Symphony, along with theDreadnought. Grand Orchestra models will be designated within theTaylor series ending with the numeral "8″ (e.g., 618e). GO modelswill be available at Authorized Taylor Dealers in the UnitedStates.

While at the NAMM show, fans can experience the new models byvisiting the Taylor Guitars Showcase (Room 213 ABC).