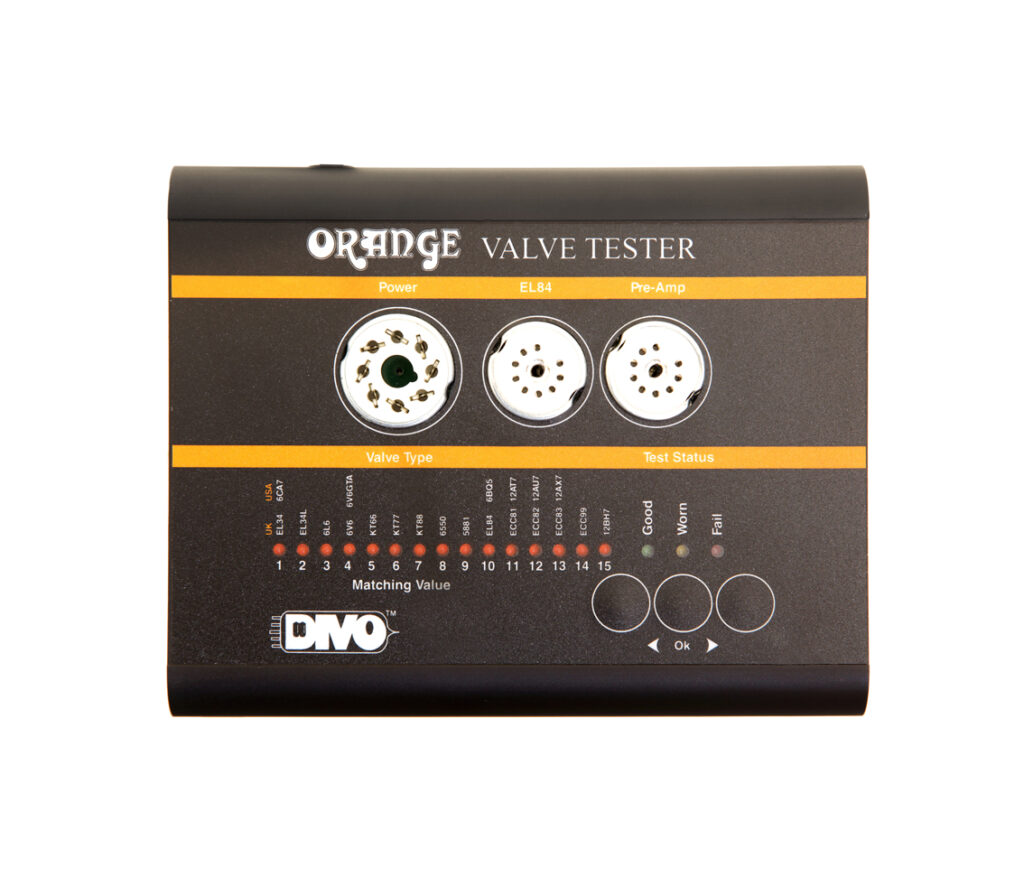 Since the inception of the vacuum tube there has beena need for a valve testing device. They've been around as long astubes have been in use and whilst you may have never used oneyourself, they are extremely useful devices for those that workwith tubes on a regular basis. The reason the regular consumer hasnever adopted them is because all of the existing testing productsrequire a high level of technical knowledge or a masters in physicsto operate. They're not meant to be used by the layman anddefinitely not by the average technophobe guitarist, yet we've allbeen in that scenario where we know we have a problem with one ormore of the tubes in our amp but have no idea which one is theculprit so end up replacing the whole lot. Tubes are expensive anddelicate objects so the ability to easily diagnose problem tubesand replace them with ease sounds like a very attractiveproposition indeed.

Here's where Orange steps in with the revolutionaryDIVO VT1000 Tube Tester, a compact, automatic, digital testingdevice that allows anyone to test tubes with the minimum of fuss.Orange is so confident of the VT1000's ease of use that it didn'teven send us a manual, saying that we'd be able to operate the unitsimply by turning it on and figuring it out ourselves! Well, thegood news is that Orange was absolutely right. I'd go as far assaying it's actually harder to use this unit incorrectly and for adevice that performs such a complex task, the user interface ispretty much foolproof.

The VT1000 performs a vast number of critical testson both pre and power-amp tubes, giving you a complete health checkand estimated remaining lifetime for each tube tested. The numberof tests will make even the most tech-savvy users reel away injargon horror but, take it from me, the VT1000 performs every testrequired to give you absolute confidence that your tubes are eithergood or bad.

The unit is housed in a solid metal chassis withthree tube sockets that will accept pretty much every type of preand power tube on the market. Operation is simplicity itselfrequiring the user to insert a tube into the relevant socket anduse the left and right buttons to select the tube type from theonboard list. Once selected, a simple press of the 'start' buttonwill run all the required tests and give you a 'Good', 'Worn' or'Bad' result and a rating that allows you to match tubes togetherand reveals the estimated life left in that tube. The tests takebetween two and three minutes to complete and, considering howcomplex the procedure under the hood is, this is a remarkableachievement from Orange. We tested a number of pre and power tubesand the results were quick, consistent and very easy to interpret.Good valves can be kept in operation and the numbered rating allowsyou to create pairs and quads of matched power tubes. 'Worn' tubescan be kept in operation but should be replaced as soon as possibleand 'Bad' tubes should be discarded and replaced immediately. Thissystem is so easy to understand that a child could operate it - letalone a technophobe guitarist!

I can really see the VT1000 becoming an essentialproduct. In terms of value for money it represents a huge potentialsaving in tubes and with the average amplifier using at least twoor three preamp tubes and a couple of power tubes, a fullreplacement set can cost a lot of money. Being able to diagnoseeach tube independently and quickly would mean that the VT1000would pay for itself in a fairly short period of time making it avery worthwhile investment indeed. For a guitar tech, or musicshop, it's going to be absolutely indispensable! I for one will begetting hold of the VT1000 upon release and have a feeling thatother companies will be looking with envy at Orange'sground-breaking technology.