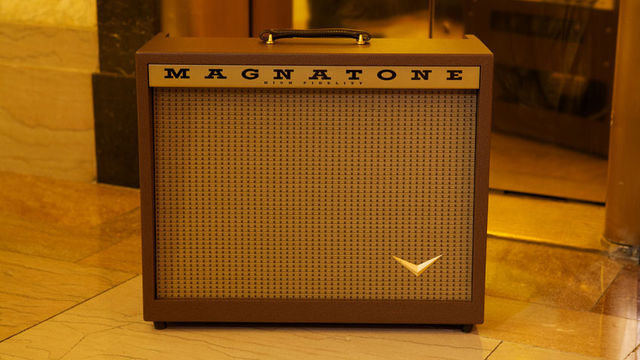 More than 40 years after it closed its doors, legendary US ampmanufacturer Magnatone is set to return with a brand new range ofamplifiers along with a completely new line of solid boy electricguitars. Whilst most of the details are still unknown this is awelcome surprise and one that Guitar Interactive will be keeping aclose eye on.

PRESS RELEASE : The rebirth of the legendary Magnatonebrand is certain to be one of the true highlights of theforthcoming "NAMM Show," (International Association of MusicMerchants') on January 24 - 27th, 2013 at the Anaheim ConventionCenter in Orange County, CA.

Magnatone will be launching a full line of high-end, vacuum tubeamplifiers featuring its famous "pitch-shifting" vibrato effect,all of which are made in the USA. The occasion marks the return ofa famous brand that has been dormant for more then 40 years yet itsstellar reputation remains untarnished by time.

Ted Kornblum is President and CEO of Magnatone. His musicindustry career began at the age of 16, when he was captivated bythe legacy of his grandfather's and father's business, St. LouisMusic (Crate, Ampeg, Alvarez, etc.) which was founded in 1922.

As the company's Artist Relation's Director, he formedrelationships with such notable talents as Crosby, Stills &Nash, Jerry Garcia and Bob Weir of The Grateful Dead, Sting, KeithRichards and Ron Wood of the Rolling Stones, The Who, BlackSabbath, Metallica, Ani DiFranco and many others.

With Magnatone, Kornblum's focus is on making high end,American-made products that the artist will want to keep and usefor a lifetime. The new Magnatone line of amplifiers is 100%tube-powered, crafted using point-to-point wiring and exceptionalworkmanship. Kornblum explained,

"I've always been inspired by creative people; behind Magnatoneis an experienced group of folks with various talents that allcompliment each other most brilliantly. This makes it very excitingfor all of us to be involved with Magnatone."

One of Kornblum's closest bonds is with ZZ Top's Billy FGibbons. In numerous conversations with Kornblum, Gibbons expressedgreat respect and affection for Magnatone products.

"Magnatone is again a reality," Gibbons remarked. "We'repleasantly amazed that the mythic Magnatone has resurfaced in sucha big way. This is nothing short of a rockin' resurrection, and thesound is every bit as great as the look. No two ways - The Mag isback!"

For the past two years, Gibbons has been touring and in thestudio using a prototype Magnatone Super Fifty-Nine, with 45 wattsprovided by a pair of EL-34 power tubes, with two 12" speakers in aluxurious yet very 'rock 'n' roll' looking combo amplifier. Hisinput, along with that of his long-standing guitar tech, ElwoodFrancis, has been incorporated in the design of many Magnatonemodels.

Neil Young is one of the most visible current users of vintageMagnatone gear, specifically the Model 280 guitar amplifier thatfeatures the Magnatone stereo vibrato effect, an integral part ofboth his studio and live guitar sound. Kornblum has been workingclosely with Larry Cragg, Young's longtime guitar tech who hasyears of experience repairing and maintaining vintage guitar amps,to capture as well as upgrade the Magnatone sound.

Magnatone's roots in Southern California date back to 1937 whenthe company began producing coin-operated radios and recordplayers, all powered by vacuum tubes and self-contained speakers.In addition, Magnatone manufactured lap steel guitars with matchingguitar amps that are noted for their finishes such as pearloid("Mother of Toilet Seat"/"M.O.T.S.") or 100% woven cotton/fauxcrocodile, covering the exterior of the speaker cabinet.

Magnatone's invention of the electrical vibrato amplifiercircuit in 1958 was, and remains, a standard for truepitch-shifting effects. Today's line of Magnatone modelsincorporates that same vibrato circuitry which, as aficionadosknow, includes silicone carbide varistors, as well as vacuum tubes,to achieve the "true dimensional sound" for which Magnatone is sorenowned.

Magnatone's invention of the electric vibrato effect, usingnon-moving parts to achieve true pitch-shifting sound was called"the golden voice" when they introduced this effect to theamplifier market in 1958.

The difference between vibrato and tremolo is commonlymisunderstood. Many amp manufacturers in the early days mislabeledone of the instrument inputs as "vibrato" when, in reality it wasnot vibrato, but rather "tremolo". Tremolo is described as aneffect that increases and decreases the amplitude (volume) of agiven signal. Vibrato is described as the "rising and falling" of anote's pitch. Not the same thing.

Today's Magnatone engineers have faithfully recreated theirpatented vibrato circuit from 1958. They have designed the modelsto include the vibrato effect as well as tremolo, as both effectsare applicable to musical instrument performance.

Kornblum says, "I plan to distribute through selective high-endretailers to ensure the brand story is told. And who better to tellthis story then these quality retailers! Besides, the Magnatonebrand has been frozen in time for forty-four years, it needs to beallowed time to "thaw" and for the market to get to know it as itwas and as it is today."

The Mag Is Back!