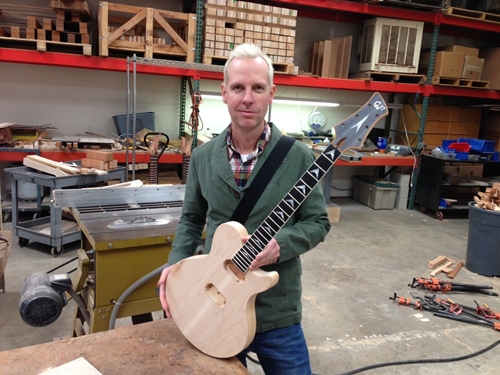 While No Doubt has been touring in support of its newstudio album "Push And Shove," the band's guitarist, Tom Dumont,has been playing a newly designed guitar called Zora. Theinstrument is not yet available in music stores, but that's aboutto change beginning in January.

Zora prototypes have been made using mahogany andSapele (African mahogany) wood and are built to maximize stability,sustain and tone. The company's own Habanero pickups as well as thevolume and tone knobs and other hardware are all made in-house.Mother of Pearl chevron-shaped fretboard inlays are inspired by ArtDeco architecture. Zora protoype 3 features a natural hand-oiledfinish and Super-Vee "BladeRunner" tremolo.

Tom Dumont commented, "Grover is amazing. He's made me three guitars so far and they allplay beautifully. By making prototypes we're able to try outdifferent ideas, find out what works, discover and correct anyflaws. It's a process. By the end of it we will have the perfectversion of Zora."

GJ2 Guitars is preparing to launch a fullline of Zora guitars in 2013, to be unveiled at the January WinterNAMM Show in Anaheim (which also happens to be the town where NoDoubt began). In addition, 2013 will be the first NAMM appearancefor the recently released GJ2 Concorde, based on adesign originally created by Grover Jackson with Randy Rhoads.

Founded in 2011 by Grover Jackson (formerly ofJackson Guitars and Jackson/Charvel fame) and Jon Gold (former VPInternational Sales for Fender), GJ2 Guitars is a LagunaHills, CA, manufacturer of superior quality electric guitars. Thecompany designs and performs all its own wood-crafting and createsnearly all of the instrument components in-house, includingpickups. Only the best woods and materials are used. Greatattention is paid to playability, tone, and build quality. GroverJackson personally oversees the production of each instrument.