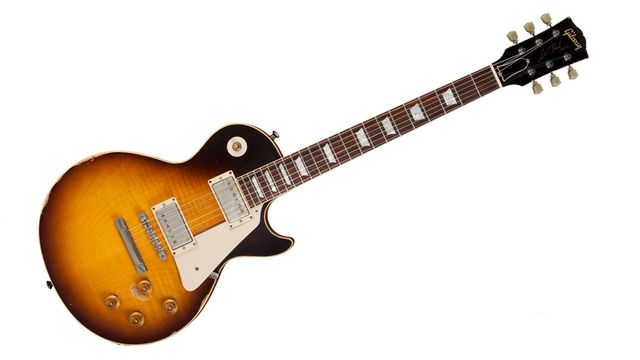 Gibson press release  Joe Perry 1959 LesPaul - Of all the great original 1959 Standards out there-a prettysmall number to begin with-Joe Perry's own Les Paul has long beenacclaimed as one of the finest. The rich, road-worn character ofthis guitar, serial number 9-0663, is utterly moving, and it seemsto throb with the wealth of music and experience earned overdecades of being played on stages and in recording studios aroundthe world. In Joe's own words, "It's got everything a great LesPaul is supposed to have. The neck isn't quite as fat as, say, a'54 Goldtop, but it's still got a good, meaty neck. It's not ahigh-output guitar, so it's got a lot of tone… And it's got all thenatural sustain and warmth, and when you turn it up it growls."

As stunning a tone monster as this guitar is, however, the storyof its passage in and out of Perry's hands over the years isequally riveting. Slash, Boston area guitar legend Billy Loosigian,and Eric Johnson have all owned number 9-0663 over the years, as itdid the rounds through the various ups and downs of Aerosmith'scareer. Once it was clear that Joe had made the shift fromstruggling to thriving as an artist, he sought to recapture hismost cherished axe for good. Many years, many phone calls, and manynear misses later, this amazing 1959 Les Paul returned to the manwho seemed destined to call it his own.

Thanks to Gibson Custom and Joe Perry, you can now own theclosest possible thing to Joe's most prized guitar, in the form ofone of a very limited run of replicas based on exclusive access tothe original. The Joe Perry 1959 Les Paul was created frompainstaking examination and measurement of the original guitar, anddelivers the full tone, feel, and look of this highly prized'Burst. It is available now in a limited run of 50 guitars aged andhand-signed by the artist, 100 aged guitars, and 150 finished inGibson's VOS process.

Gibson Custom has gone to great lengths with the Joe Perry 1959Les Paul to create a guitar that possesses the very spirit of theoriginal. The recreation starts with a solid, one-piece premiumlightweight mahogany body married to a hand-selected maple top. Theguitar is finished in an exclusive Faded Tobacco Burst withHistoric "Vintage" aniline red and dark walnut dye on the back,sides, and back of the neck, just like the original The hand-agedexamples show characteristic wear that authentically matches theplaying wear on the original, while the VOS guitars display agently-aged patina in the finish and hardware. The neck is carvedfrom a single piece of quarter-sawn mahogany and profiled to a fulland sweetly rounded '59 shape derived from precise measurement ofJoe's own guitar, then topped with a one-piece rosewood fingerboardinlaid with period-correct cellulose trapezoids. A set of KlusonDeluxe tuners, a lightweight aluminum stopbar tailpiece, and ABR-1bridge complete a period-correct hardware complement, while vintagecream binding, gold Top Hat knobs, and a cream plastic pickguardenhance the guitar's vintage looks.

The Joe Perry 1959 Les Paul sounds every bit as phenomenal as itlooks and feels, thanks to a pair of Custombucker humbuckingpickups designed to closely match the original PAFs in Joe'sguitar. Each is made with an Alnico 3 magnet and wound withaccurate plain-enamel 42 AWG plain-enamel wire to specs determineby close measurement of the original pickups, with a neck pickupthat reads around 8k ohms and bridge pickup that's slightly hotterat 8.5k ohms for plenty of authentic growl. Controls include thetraditional independent volume and tones, with "bumble bee" tonecaps on the latter, and a three-way Switchcraft™ axial toggleselector. Put it all together, and it's like making thiswell-traveled, rock-history-making Les Paul your very own-but theJoe Perry 1959 Les Paul is only available in strictly limitednumbers, so reserve yours now at your authorized Gibson Customdealer.