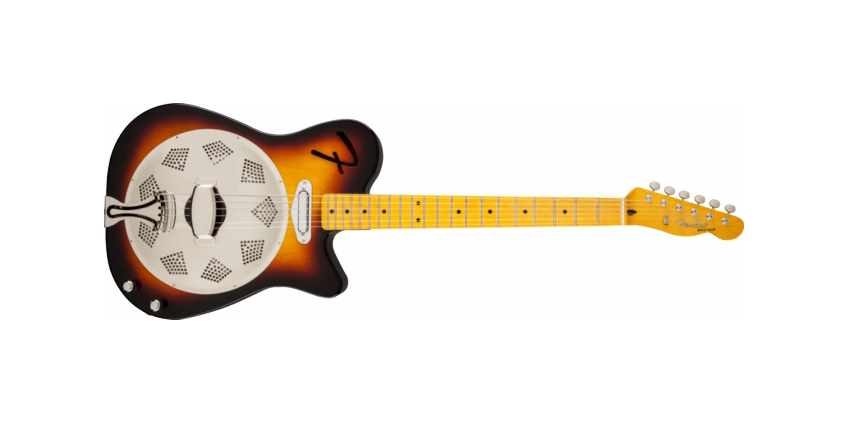 Did someone say Led Zeppelin lll turned up to 11? Fender today unveiled two new instruments which blur the lines between folk and rock. The Reso-Tele and the Mando-Strat feature an alder body and a bridge made on the same machine that produced the parts on Fender's electric mandolins from the late '50s

PRESS RELEASE - The classic Fender electric mandolin returns as the new Mando-Strat. This highly distinctive and charmingly diminutive instrument evokes the Fender electric four-string mandolins of the 1950s and '60s, with an updated and improved design for modern players.

The distinctive shape and chiming tone of Fender's late-'50s electric mandolin are back, with features including a solid alder body, 13.78" scale, "C"-shaped maple neck with 24-fret rosewood fingerboard, and specially designed pickup with volume and tone controls. Other features include a vintage-style bridge with chrome plate made on the actual machine used to produce the original parts half a century ago, three-ply tortoise shell pickguard, vintage-style tuners, and chrome hardware.

Fender Acoustics now offers you a truly remarkable instrument in the distinctive form of the Reso-Tele, which is exactly what the name suggests-a resonator version of a Telecaster. This unusual design, combined with the Telecaster pickup and under-saddle pickup and electronics, makes for a one-of-a-kind playing experience with an appealingly traditional vibe.

The Reso-Tele has a maple Telecaster body with a stylish Two-color Sunburst finish, stylized Fender "F" sound hole and hand-spun cone crafted in Eastern Europe for rich resonator tone. Its standard Telecaster neck pickup and Fishman® Powerchip under-saddle pickup can be blended together to taste, along with a master volume control. Other features include a "C"-shaped maple Telecaster neck with a 15.7"-radius rosewood fretboard, maple "biscuit" bridge with bell-brass nickel-plated tailpiece, and chrome hardware.