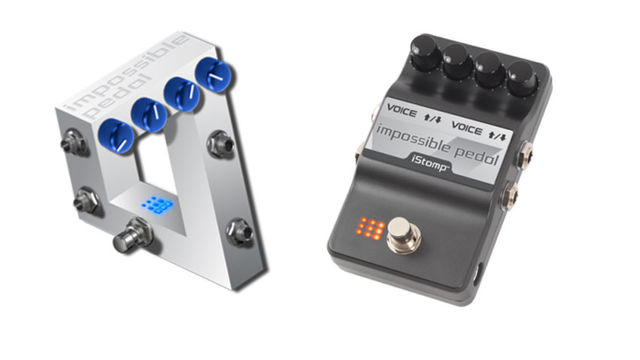 Digitech has announced a new addition to the iStomp lineup whichallows guitarists to play impossible riffs.

PRESS RELEASE - DigiTech is proud to announceits first in a line of iStomp Signature Artist e-pedals, joiningforces with guitarist extraordinaire Adrian Belew to debut TheImpossible Pedal. The e-pedal lives up to its name, givingguitarists the ability to play impossible guitar riffs that youwould never think to play.

Adrian Belew needs little introduction as a beyond-cutting-edgemusician who has smashed sonic boundaries with artists includingDavid Bowie, King Crimson, Talking Heads, Frank Zappa, Nine InchNails and others, and over a diverse solo career spanning nearly 20solo albums. The cries, grunts, squeals, industrial noises,twang-bar-king whammy effects and other otherworldly sounds he cancoax out of his instrument make him one of the world's mostuncategorizable guitarists.

Two knobs on The Impossible Pedal set the two different pitchintervals and two knobs select whether the pitches shift up or downover a two octave range. By stepping on the footswitch, the noteplayed by the guitarist alternates between the standard(unaffected) pitch and the two pitch-shifted voices, to createmelodic passages that extend beyond physical human ability. Evenits iStomp icon is an impossible optical illusion that has to beseen to be disbelieved.

The DigiTech iStomp is a new concept in guitar stompboxes thatallows musicians to turn the iStomp into any pedal available in theStomp Shop online pedal store. Offering almost limitless sonicpossibilities, the iStomp connects to an Apple® IOS device wheremusicians can use the free Stomp Shop app to load it with thee-pedal of their choice. The Stomp Shop app comes with ten of themost popular pedals and gives access to more than 40 additionale-pedals they can browse, try out and purchase. More e-pedals areadded on a regular basis.

The DigiTech The Impossible Pedal e-pedal will be made availableat the beginning of NAMM at a suggested retail price of $19.99. TheDigiTech iStomp is currently available at $229.95 suggestedretail.