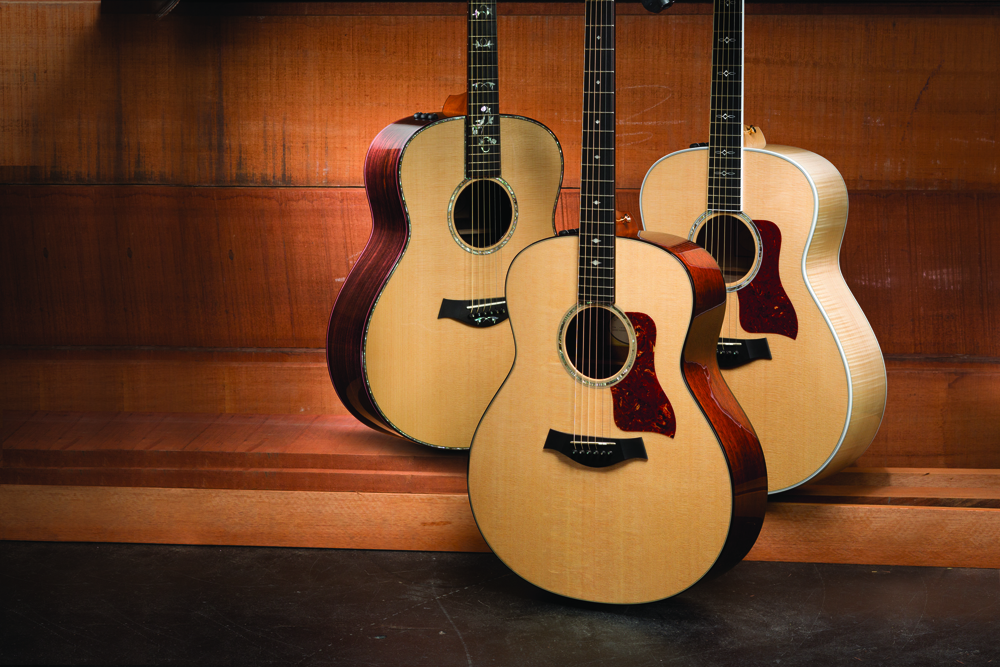 The Taylor Grand Orchestra, the newest body shape inthe company's guitar line, debuted earlier this year at the WinterNAMM Show to rave reviews from dealers and players. As part of ayear-long rollout, Taylor is pleased to introduce the latest GrandOrchestra model, the all-koa K28e, at the Musikmesse trade show inFrankfurt, Germany.

The K28e boasts the bold yet balanced voice of itsGrand Orchestra body shape, while koa's appealing tonal flavorsblend the midrange of mahogany with a splash of high-end sparkle.The koa top tends to impart a more controlled attack to theguitar's sound compared to spruce, explains Taylor master builderAndy Powers, who designed the guitar. "The koa top makes a moresubtle entrance," he says. "The notes have a graceful, 'fashionablylate' quality, giving the player a smooth and sweet-soundingsustain." The Grand Orchestra's proprietary bracing is a hybridparabolic and scalloped design that produces unprecedented balanceand responsiveness for a big-bodied guitar.

Like other Grand Orchestra models that have beenintroduced this year (the 518e, 618e and 918e), the K28e makes itsdebut with a special release of 100 First Edition models. Inaddition to the beautiful wood-rich appointments that characterizeother Koa Series models - Indian rosewood binding, a rosewood andmaple rosette, and Island Vine inlay - premium touches includeAA-grade koa and tone-enhancing Adirondack spruce bracing. EachFirst Edition model K28e comes with a custom label and ships in aDeluxe "First Edition" hardshell case. Once the guitar isregistered, the owner will receive a custom GO First Edition guitarstrap, a numbered certificate of authenticity, and a specialcommemorativebooklet. All models are equipped with Taylor'sproprietary Expression System® acoustic electronics. The K28e willeventually become a standard model with the Koa Series.

The Grand Orchestra was born from Taylor's passionfor innovation and desire to revoice the Taylor Jumbo. Rethinkingwhat a modern big-bodied guitar could be, Taylor's team of luthiersexperimented with new body dimensions. One of the goals was tocapture some of a Dreadnought's robust tonal personality to producebig, round, richly solid notes. The resulting Grand Orchestra shapeis slightly longer than a traditional Dreadnought, features atighter waist and a wider bottom bout to heighten the tonalproperties, and a deeper body depth to increase volume output. Itsvoice is strong and complex, with the kind of tonal balance thatfits perfectly into Taylor's family of shapes and sounds.

The Grand Orchestra is the fifth body shape inTaylor's acoustic guitar line, joining other proprietary Taylorshapes including the Grand Concert, Grand Auditorium and GrandSymphony, along with the Dreadnought. Grand Orchestra models aredesignated within each Taylor series by ending with the numeral "8"(e.g., 618e). GO models will be available at Authorized TaylorDealers around the world.