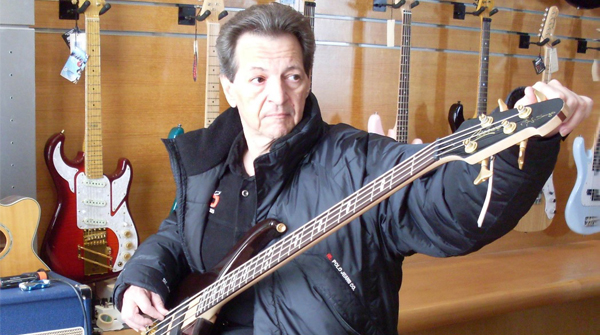 Music and audio innovator Peavey Electronics mourns theloss of one of its most celebrated instrument designers; masterluthier Michael Powers, who passed away on April 29, 2013. Powerswas an integral part of Peavey's development of musical instrumentsthroughout the last four decades. He will be remembered for hisinnovative guitar designs, uncompromising work ethic, and warmnature.

Powers' first instrument was a $22 mail order acoustic guitar.He soon moved to an electric and attempted his first refinish.Stripping away the paint, he spray painted the guitar red. Powerswould go on to play bass on the Chicago club circuit whiledeveloping his keen instrument repair skills.

After years of touring, Powers decided to shift his careertowards repairing and designing instruments, which led to his firstinteraction with Peavey Electronics founder, Hartley Peavey.

"Mike was part of the heart of this company," shares HartleyPeavey, founder and CEO of Peavey Electronics. "It's hard to thinkabout him not being involved in our next generation of products. Hewas a master craftsman and someone I could always count on to dohis best and more. He will be sorely missed."

After joining the company in 1981, Powers went on to help designsome of Peavey's most iconic models including the Wolfgang®,Vandenberg, and Generation™ ACM guitars, as well as the T-45™,T-20®, Cirrus™, Millennium®, Foundation®, and Sarzo bass guitars.Throughout his career, Powers worked closely with artists such asRandy Jackson, Michael Anthony, Donald "Duck" Dunn, Steve Cropper,Eddie Van Halen and Rudy Sarzo.

"I'm devastated by the news of my dear friend and master luthierMike Powers' passing. In the late '80s Mike and I worked side byside on every detail of the design of my first Peavey Signaturemodel," says bassist Rudy Sarzo. "Mike was a perfectionist. Hisforward thinking, craftsmanship and attention to details is a majorreason why I and countless musicians around the world play Peaveyinstruments."