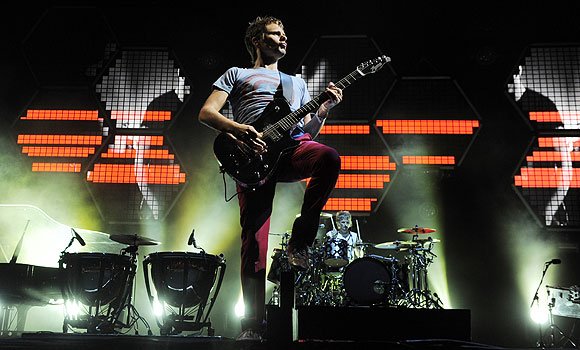 Muse have unveiled the officialvideo for their Olympic song 'Survival' - you can watch itbelow.

'Survival' is the official track for the London 2012Olympics, with the video featuring classic clips of athletes at theGames. The track will be played when athletes enter the stadium, inthe lead up to the medal ceremony and also as the theme for allinternational TV coverage.

The band have said the song isinspired by "total conviction and pure determination to win". Itwas debuted on Radio 1 last week (June 27).

Writing about 'Survival', the band said: "We are honouredthat the Olympics have chosen our song to officially represent theLondon 2012 Olympic Games across the globe."

The band's new album is the follow-up to 2009's 'TheResistance' and has been recorded in London. Little has beenrevealed about the album so far, but bassist Chris Wolstenholmepreviously said that the band wanted to do "something radicallydifferent" on their new LP.

The Devon trio will play five shows across the UK inOctober. The gigs begin at Glasgow's SECC on October 24, before theband move onto London's O2 Arena for two shows on October 26 and27. They then play Birmingham LG Arena on October 30 beforefinishing up at Manchester Arena on November 1.

Thanks to NME for the report.