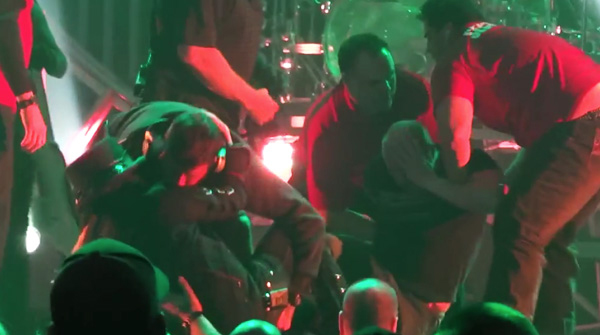 Motley Crue guitarist MickMars was left floored on Saturday night after an audiencemember stormed the stage during mid-performance.

Mars, who has suffered from Ankylosing Spondylitis since the ageof 19, was knocked down by the stage invader who also grabbedsinger Vince Neil before being tackled by security men and kickedin the head by Nikki Sixx.

The Crue was performing 'Primal Scream' at a show inCanada when an audience member managed to evade security andclamber on the stage running straight into Mars, who wascelebrating his 62nd birthday. Mars later reported his personalguard Rhyno had suffered two broken ribs.

The show was halted as the band's techs and roadies restrainedthe 'fan' and picked Mars off of the stage floor and helped himoff. Drummer Tommy Lee shouted:

"What the fuck is wrong with you, you fucking idiot?" Neiltold the crowd: "We might be back," before disappearing. After adelay they returned and finished the show.

"Thank all of you for your concerns about me being knockeddown last night. I'm alright; nothing broken. My bodyguard Rhynogot two busted ribs."