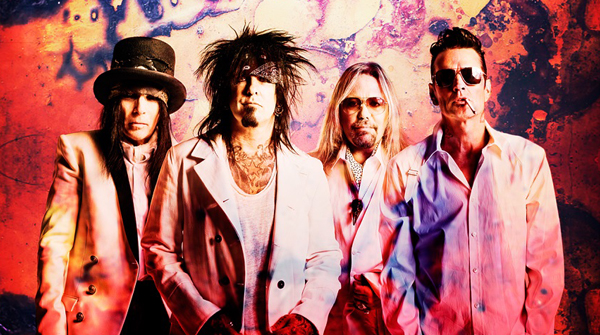 Mötley Crüe, one of the most legendary and iconic rock bands in the world, recently revealed which European cities would be included on their Final Tour.  The European dates are part of the band’s 2-year ‘Final Tour’ cycle that will culminate at Staples Centre on December 31st in the band’s hometown of Los Angeles, CA.

With Alice Cooper as their very special guest, the full line-up has now been finalised with the addition of SΔINT ΔSONIΔ appearing on all tour dates except Manchester, Birmingham and Newcastle which will have UK band The One Hundred opening.  SΔINT ΔSONIΔ is a Canadian-American rock band consisting of ex-3 Days Grace singer Adam Gontier, Staind guitarist and writer, Mike Muskok with Corey Lowery (bass), and Rich Beddoe (drums). Their self-titled debut album charted at #2 on the Billboard Rock Chart and is due to be released in Europe via Century Media/Sony on October 23rd (pre-order available at Apple iTunes here: http://smarturl.it/SaintAsoniaEU).  The band’s debut single, “Better Place,” has been in the Top 10 U.S. Rock Radio Chart for 8 weeks and counting.   Of the band, Loudwire recently wrote, “Saint Asonia — put that name in your memory bank! Why? Because it appears to be the moniker for rock’s next super group with an impressive resume to boot.”

The November tour dates will be the ultimate farewell to the European continent as Mötley Crüe bring their biggest production and pyro show to date, including Nikki Sixx's flame throwing bass and Tommy Lee’s “Crüecifly” drum roller coaster, as well as the “Crüesnest” where fans can sit with the band up close and personal during the grand finale of the show. Check out highlights from Mötley Crüe’s show here: http://bit.ly/1G2uGFC

"We're excited to come back to Europe with all the songs, bells and whistles and say goodbye during The Final Tour to the greatest fans in rock n roll."

After thirty-four years performing together, the 2015 leg of the Final Tour includes shows all across the globe. Mötley Crüe recently finished touring in Australia, New Zealand, Japan, and the European festival circuit which included a fantastic Download appearance in the UK.

Mötley Crüe originally announced plans for their two year Final Tour by signing a Cessation Of Touring Agreement at a press conference in Los Angeles in January 2014, solidifying the end of their touring career as December 31st 2015. Since the announcement the band has been touring tirelessly to say goodbye to fans around the world.

The 2014 leg of the Final Tour was one of last year’s top grossing tours, selling close to a million tickets across 72 cities and grossing more than $45 million. “Mötley Crüe’s Final Tour has been a massive global success and a true testament to the popularity of this legendary rock band,” says Rick Franks, Live Nation’s Regional President of North American Concerts. “New Year’s Eve 2015 will mark the end of an era in rock history but there’s no doubt that Mötley Crüe’s music will influence generations of artists for years to come.”

Audiences can also expect a high-energy performance from very special guest Alice Cooper*, who already joined the band for the Final Tour in 2014.  He will be tearing up the stage once again on most 2015 dates. The pairing has been roundly praised as a must-see by fans and media alike.

*With Alice Cooper
^ With Saint Asonia
+ With The One Hundred