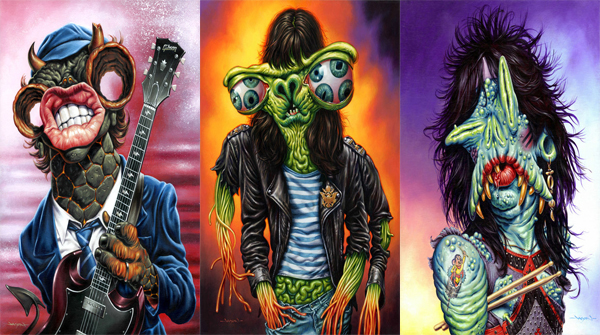 Canadian based artist Jason Edmiston has made a number of limited edition prints available from his 'Monsters of Rock' series at his Etsy shop, reports UltimateClassicRock

Edmiston has been a commercial illustrator since 1996 and first debuted his range of surreal images in 2011 at NYC's Underground gallery show. The second half of the set was then released at the Phone Booth Gallery in Long Beach, CA at the start of year.

In the 'Monsters of Rock' series famous musicians are re-created into some pretty vile looking creatures sim. Some of the rockers that have been feature in Edmiston's prints are Joey Ramone, AC/DC's Angus Young & Motley Crue drummer Tommy Lee.