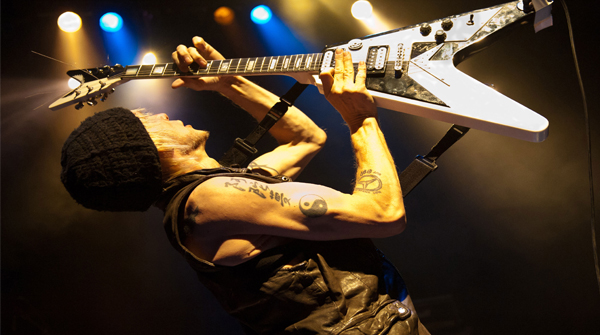 At the ripe age of 15, after a very early start in hisprofessional music career recording his first album with theScorpions and after joining UFO age 17, Michael Schenker focusedexclusively on lead guitar and pure self-expression.

The second chapter in his career was focused on experimentingand developing his expertise on a more musical and personal level.With excellent musicians, friends and fans from all over the world,this live recording is part of this celebration.

Schenker sees his music as a building block in the construction ofthe Temple Of Rock.

"The Temple is almost finished," explains Michael."The foundation was laid in the 60s by Led Zeppelin, DeepPurple and Black Sabbath. The walls were then built by UFO andothers in the late 70s.  By the 80s it was further reinforcedby the likes of the Scorpions, and many other influential rockbands.

"There's not much new left to expect, but I am glad to be apart of this temple," says Michael. "It's unbelievable fun and anhonour to share a stage and make music with some of the world'sbest musicians."

A concert from Tilburg, the Netherlands was recorded in May 2012that noticeably distinguishes itself from previous releases due tothe line-up that includes MichaelSchenker (lead guitar), DoogieWhite (vocals), HermanRarebell (drums), FrancisBuchholz (bass) and WayneFindley (rhythm guitar, keyboards).

All in all, there has never been such extensive and high qualitymaterial from Michael Schenker for your viewing and listeningpleasure.

In Issue 8 of our free digital magazine we met withMichael Schenker to discuss his solocareer and his many years with the Scorpions.Along with an exclusive interview with the German hard rockicon we also have an in-depth Schenker masterclass and styleanalysis, only in Issue 8 of Guitar Interactive Magazine.