Michael Schenker's Temple of Rock "On A Misison: Live in Madrid" 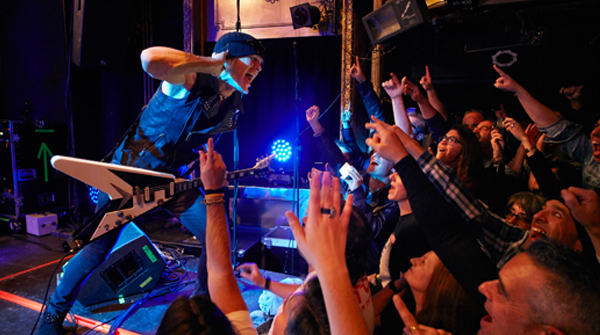 Michael Schenker’s "Temple Of Rock" will release "On A Mission: Live In Madrid" – a new live recording and filmed concert released by inakustik on CD, DVD, Blu-ray and Digital on Friday 29th April, 2016.

Filmed and recorded at Madrid’s Joy Eslava Theatre on November 19th as part of Michael Schenker’s Temple Of Rock’s 2015 European tour, the concert features their recent rock radio hits Vigilante Man, Communion and Live and Let Live, as well as the MSG/UFO/Scorpions classics Doctor Doctor, Lights Out, Too Hot To Handle, Rock You Like A Hurricane and Rock Bottom.

During their 2015 World Tour, Michael Schenker and his crew chose Madrid’s Joy Eslava Theatre as the location for the recording of the concert. The historical 3-story theatre created an intimate relationship between the band and audience.

On the evening of November 19th, 2015, a sold-out Joy Eslava captured the power and excitement of Michael Schenker’s Temple Of Rock in full flight.  During the concert it soon became apparent just how close the band and the audience became, and how they drove each other on to even better performances. The musicians clapped along with the fans as they sung along to hits old and new with great enthusiasm.

Every musical chapter of Michael Schenker's career was included. The evening became a joyous party and a clear message of how positively his music enriched the lives of his listeners.

The set got off to an ideal start with Doctor Doctor from the UFO era and within seconds, fans and band alike had warmed up to the temperature at which rock melts. This high level of enthusiasm was maintained throughout the entire show and made the heavy rock show into a special event that will stay forever in the memories of the musicians and those watching.

The sheer density of hits from four decades, including (among many others) Lovedrive and Blackout (Scorpions), Lights Out and Rock Bottom (UFO) or Victim Of Illusion (MSG) as well as more recent songs from the last three Michael Schenker’s Temple Of Rock albums made sure that it was an evening the fans would never forget.

During this concert, Schenker played various guitars, including the premiere of his new double-neck Flying-M with 2 necks, each with 6 strings, with each neck tuned differently.

The concert was recorded using state-of-the-art sound and video technology. An immense effort went into the filming. 4K technology cameras provide perfect, crystal clear pictures. Additional room microphones were placed at different levels in the auditorium, all of which will provide an additional Dolby Atmos 3D mix on the Blu-ray edition.

On A Mission: Live in Madrid is an open invitation for the fans of the Mad Axeman to see him in his guitar element. Where else could fans of hi-octane guitar rock experience such an emotional and energetic show?

Michael Schenker’s Temple Of Rock -  "On A Mission: Live In Madrid"