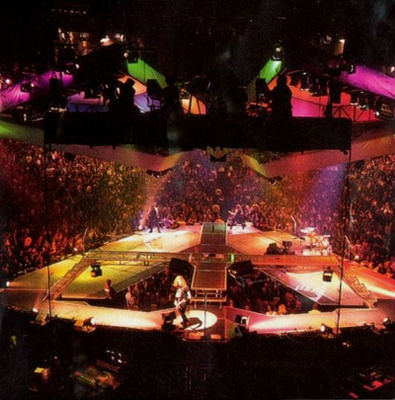 Metallica will soon be trekking through Europe celebrating the20th anniversary of the release of their iconic 'Black Album' byperforming the record, in its entirety, at all 16 dates. However,if the chance of hearing their seminal self-titled fifth studioeffort, in full, wasn't enough, then the band are set to raisenostalgia levels in further with the return of the infamoussnake-pit stage extension.

The famed diamond shaped 'Snake Pit' become infamous on the summertours of 92 & 93 and held between 150 and 200 hardcoreMetallica fans within the staging area, secluding them from therest of the crowd.

Met Club members with floor/front section tickets (it varies byvenue) are eligible to win passes to watch from the snake pit atall shows on the European tour this summer with the exception ofRock Am Ring on June 2, where local production constraints preventus from setting the snake pit up

A statement from the band reads:

'As you may have heard, the theme of our summer trek throughEurope is celebrating the 20th anniversary of the release of theBlack Album by playing it in its entirety at all 16 shows. And whatwould a tour of the Black Album be without a snake pit???? Forthose of you who were with us almost 20 years ago for the summer of'92-'93 tours, you might recall that diamond shaped pit extendingfrom the middle of the stage, well it's baccccckkkk for our littlesummer vacation!'