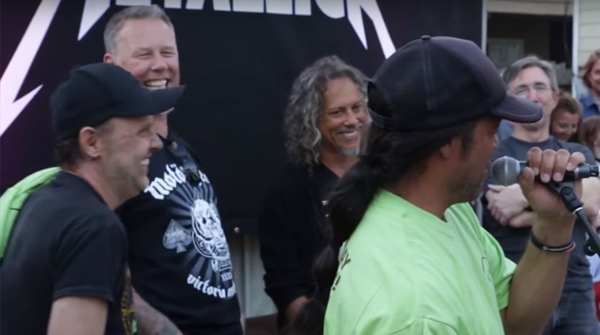 Metallica took a nostalgic trip back to the San Francisco Bay Area as part of Record Store Day on April 16th.

A number of the band's friends, family and management returned to the house with James Hetfield, Lars Ulrich, Kirk Hammett & Robert Trujillo to the house  that the band called their home in the early 80s. Which also earnt them a proclamation from Mayor Greg Lyman.

The address at 3132 Carlson Boulevard in El Cerrito has been dubbed The Metallica Mansion and is where the band lived from 1983 - 1986. Metallica a number of tracks which featured on "Ride the Lightning" and  "Master of Puppets" in the house's garage, which has now been torn down.

"This is unbelievable to be back in this place", frontman Hetfield proclaimed to a growing crowd.

"I think we've all kind of forgotten a lot of stuff that's happened in our history and this is a great way to jog our memories and to see people's faces here, as well. We are so grateful for everyone that's hear and has been a part of this with us.

We're just extremely grateful to still be rocking and playing after all these years, doing what we love doing...that doesn't happen to everybody."

Metallica are currently working with new producer Greg Fidelman on the follow up to 2008's "Death Magnetic".