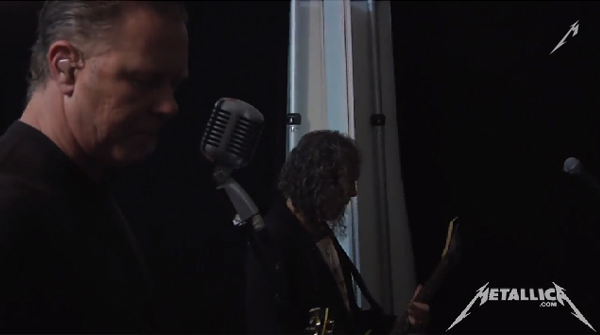 The 20 minute fly-on-the-wall style video features the band working on new song, 'Lords of the Summer', in the tuning room (which was also debuted at the Bogota show) as well as '...And Justice For All'. The short film includes commentary from frontman James Hetfield, the band's pre-show huddle plus the new 'By Request' intro and 'Blackened' recorded at the show.

The Metallica 'By Request' tour will reach European shored this summer, with a single North American date confirmed in Montreal.

The rest of Metallica's "By Request" show featured such classics 'Master Of Puppets', 'Welcome Home (Sanitarium)', 'Sad But True', 'Fade To Black', 'One' and 'Enter Sandman'.