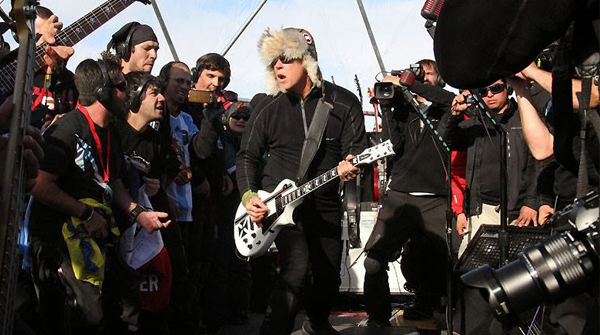 Metallica performed a unique showcase this past Sunday as part of a Coca-Cola Zero sponsored promotional event, in Antarctica.

The thrash titans performance was transmitted to the crowd via headphones and with no amplification.

"This was the most unique show Metallica has ever done,” posted the group.

“The band, contest winners, research station scientists (from Russia, South Korea, China, Poland, Chile, Brazil and Germany), and the ship crew, all crammed in this little dome out on the helipad of Carlini Station in Antarctica! The energy in the little dome was amazing! Words cannot describe how happy everyone was."

The Coca-Cola Zero contest was open to fans from several Latin and South American countries.

In related news Metallica has announced that their only UK gig of 2014 will be at Knebworth House for the return of the Sonisphere Festival in August.